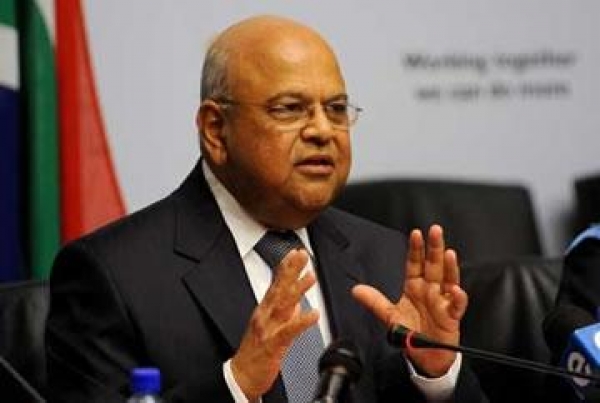 Pravin Gordhan MP, South Africa’s Minister of Finance since May 2009.

The Minister of Finance Pravin Gordhan gave the Budget Speech for 2013 in Parliament late last month. Problems such as sluggish economic growth, a widening budget deficit, declining tax revenues and higher debt levels all weighed heavily on the choices the Treasury had to make in the R1.06-trillion budget.

The environmental organisation alliance One Million Climate Jobs had the following to say:

We welcome the introduction of a carbon tax as a long overdue mechanism to reduce South Africa’s carbon intensive economy, rated as 12th biggest emitter of greenhouse gasses in the world. However, we question the 60% tax-free exemption AND the “additional allowances for emissions intensive and trade-exposed industries” proposed by Minister Pravin Gordhan. The intended beneficiaries are no doubt the High-Energy Users Group that consumes over half of all Eskom generated power, such as the trans-national smelters.

This flies in the face of recommendations of the National Development Plan (NDP). The plan specifically argues for low carbon interventions, including carbon-pricing mechanisms which “target specific mitigation opportunities”; while enabling an equitable and just transition to a low carbon economy.

We note with alarm that most of the low carbon innovations mentioned in the budget are piecemeal interventions, such as the installation of solar geysers and “procuring renewable energy” alongside Expanded Public Works Programme opportunities, rather than a comprehensive and ambitious plan towards meeting our long-term mitigation targets and taking decisive steps to combatting climate change.

The NDP also specifies the need for the “development of renewable energy technologies, which are intended to contribute to the creation of jobs”. The Climate Jobs Campaign’s own research shows that meeting a target of 50% energy generation through renewables by 2020 could create a net 150 000 jobs which is 27% more jobs than coal and nuclear generation. But the Finance Minister gave us no signal that considerable investment in renewables is even contemplated, regardless of the urgent need for this given South Africa’s twin scourges – world record unemployment as well as one of the highest polluters when emissions are measured per unit of GDP growth.

In fact, we note with dismay the intention to expand Eskom’s operations beyond the borders of South Africa, at a time when there are questions about its governance and sustainability. South Africans are faced with the prospect of huge escalations in electricity tariffs for expanding energy generation that entrenches a polluting extractive path and delivers few decent jobs.

Instead of concentrating on a building a renewable energy industry base for the future, the bulk of investment forecast for the Industrial Development Corporation is proposed to go towards mega-projects heralding more pollution, such as mining and pipelines.

In the context of a budget that presupposes escalating growth as a precondition for redistribution, in line with the neo-liberal turn of the post-liberation of the ANC, there is little that promises either short or long-term relief for the desperately poor. The budget must thus be seen as a missed opportunity in setting the scene for a state-led intervention to establish a renewables industry that would not only help South Africa to meet its international obligations on emission reductions, but also meet its own targets in job creation.