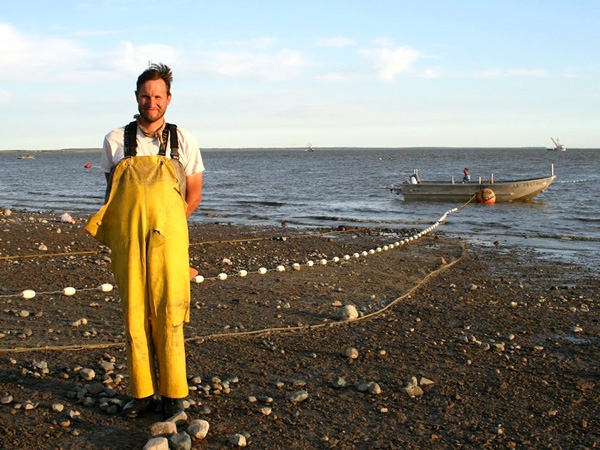 Future of Fish is a nonprofit that is helping entrepreneurs who hope to reinvent the seafood industry by attacking problems throughout the long supply chains used by today’s industrialized fisheries.

“We hope to change incentives for behavior in the industry so it’s no longer profitable to overfish and to fish non-sustainably,” founder Cheryl Dahle explained. “And we’re looking to reward sustainable behavior with a better price.”

The effort begins with making information more available, properly identifying fish, and tracking it all the way from sea to plate. Today’s consumers have little idea where, when, or how most of their fish was caught. In fact, genetic studies show they often don’t even know what kind of fish they are really buying.

“Estimates vary but some 30 to 70 percent of the fish sold in the United States is mislabeled,” Dahle said. “If fish is mislabeled you don’t have a real choice to eat the right kind of fish. Until the marketplace becomes transparent you can’t value fish for where it came from or how it was caught—and those are two main pillars of sustainability.”

At the same time, many popular fish species like orange roughy and bluefin tuna have collapsed under fishing pressure. Some studies suggest that today’s populations of large ocean fish are at just 10 percent of their preindustrial levels. Some scientists warn that all fisheries could be in collapse by 2050.

However, many fish populations have shown an ability to rebound if they are managed. Tough regulations often encounter pushback, but Future of Fish hopes to drive adoption by making them better for business. “Our approach is not a substitute for policy changes,” Dahle said. “But we’re trying to re-engineer the incentives through the ways fish are traded every day.”

in the nose of the salesman

Future of Fish’s entrepreneurial partners work with processors and distributors to improve sustainable practices, both for frozen fish and fresh.

“The truth is that fresh is not a regulated term,” Dahle added. “It’s defined as not frozen or smoked, but fresh is in the nose of the salesman. Often what you are buying as fresh fish may be 30 days old. If people knew more about fish distribution they would understand the value of buying fish that was landed just days before they eat it as opposed to weeks.”

One company Dahle works with is using tag technology to track the temperature of fish as it moves through the supply chain, to better monitor quality—this is especially important when it comes to sushi-grade products.

“Once you have tracking technology imbedded in fish you also have a perfect traceability chain,” Dahle added. “Was this tuna part of a catch using fish aggregating devices? Was it caught legally? You can start to track some of these things that really matter for sustainability.”

consumer buy-in is but the beginning

Dahle is confident that many consumers are concerned enough about the health of our oceans to pay a premium for sustainably caught product. But she also stresses that, once they are being rewarded, such practices can spread throughout the larger seafood market as well.

“Not all coffee is Fair Trade, but the advent of Fair Trade has changed and improved the practices of a much larger portion of the supply chain, including large buyers like Dunkin’ Donuts,” said Dahle. “The premium, sustainable market doesn’t have to be the largest percentage of the market to have a big influence.”

But the sustainable market does have plenty of room for growth, she added, which could mean less pressure on ailing fish stocks.

“There is no reason why you can’t take [sustainably caught] Alaskan salmon, and portion it properly and sell it at a price point that can be served in a fish taco,” Dahle said. “It’s absolutely possible to do sustainable, affordable fish.”

Sea to Table is a boutique distributor working with small fishermen such as the one pictured, and is one of the many small businesses working toward seafood sustainability with the support of Future of Fish.