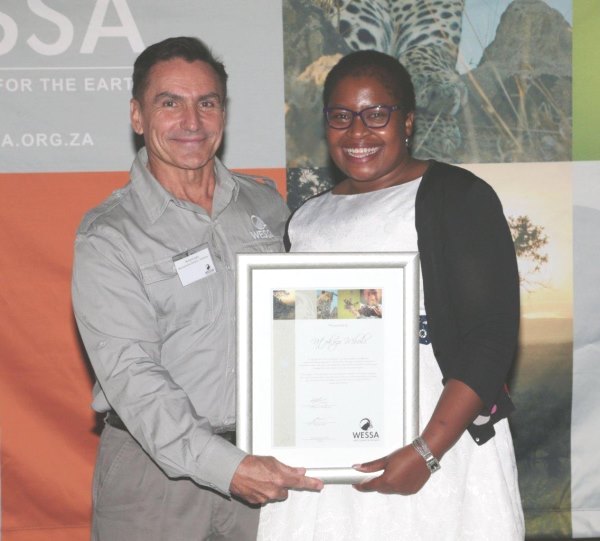 Dr John Hanks, Ntokozo Mbuli, Franz Fuls, the Paul Roux Residents’ Forum and the ROSE Foundation all received awards at a special ceremony held during the 89th Annual General Meeting of WESSA (the Wildlife and Environment Society of South Africa) at Goedgedacht Farm near Malmesbury in the Western Cape on Saturday.

Presented annually since 1974, the awards enable WESSA to recognise and honour individuals, corporations, organisations, and community, educational or volunteer groups that have made a significant contribution to environmental conservation or to environmental education in South Africa over a sustained period of time.

In addition to the awards ceremony, the programme at the event was structured around the theme of “Visions of Sustainability” and a number of talks by leading role-players, who are also WESSA members, provided perspectives on the significance and challenges of sustainability in their respective sectors.

Grants must be used to leverage additional and sustainable funding

Dr Howard Hendricks, SANParks Acting Managing Executive for Conservation Services, provided insights into the diverse funding streams that are currently used by conservation organisations to sustain the ecosystems and built infrastructure in our protected areas.  In particular he argued that we need to work wisely with government grants and ensure that these grants are used to leverage additional and more sustainable funding through tourism and other income streams. 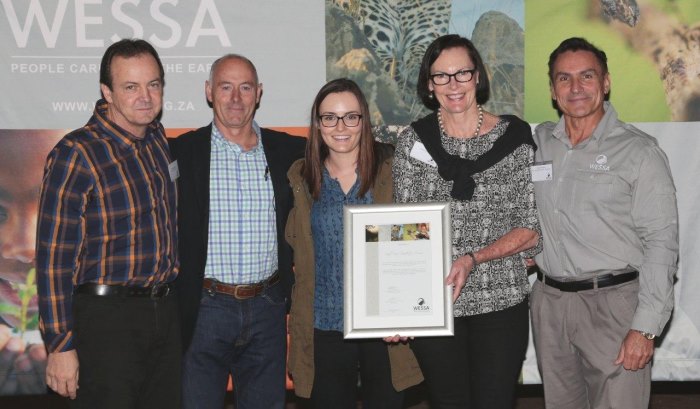 No sustainability with our addressing poverty

He stressed that as we seek to address the threats to sustainability – such as the spread of alien invasive plants, animals and diseases – we also need to build a more equitable society, to protect and restore our ecosystems and to ensure that our economy contributes to these processes. Over many years the extended public works programmes and other environmental protection programmes that are managed by DEA have sought to find this balance. It was evident from the talk that a lot has been achieved but that a lot also remains to be done.

He described how Woolworths is working with suppliers, business partners, academics, scientists, NGOs and customers to manage their direct and indirect impact on communities and the world around them. Woolworths’ goal is that by 2020 every product they sell should have at least one sustainability attribute, such as being hormone free, organically produced or produced in a socially responsible manner. 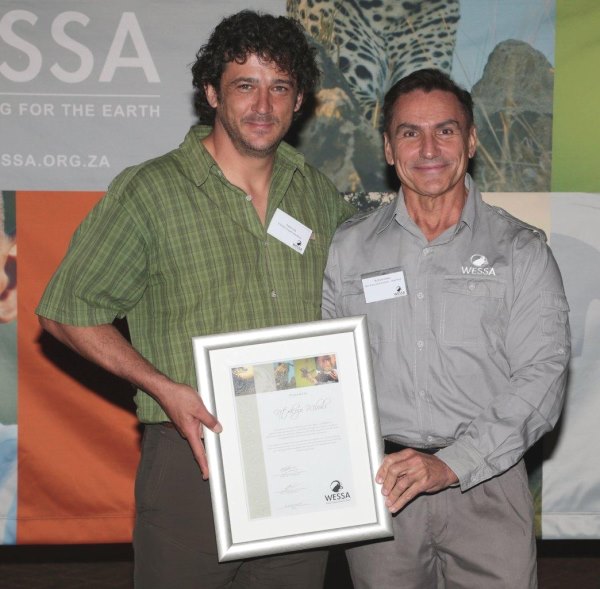 Dr Jim Taylor, WESSA’s Director of Environmental Education, described how WESSA has been able to make substantial contributions to sustainability in South Africa and beyond, by leveraging membership involvement, a professional staff and wide-ranging partnerships. He highlighted the point that human capacity development is a major focus of WESSA’s work, noting that “Since human actions are causing the issues the solution must be with humans”.

He also spoke about recent innovations, including the development of citizen science tools that can be accessed through smart phones and can be used to assess, monitor and report on water and biodiversity challenges. These tools have placed WESSA at the forefront of sustainability work in South Africa.

Peter Templeton, Director at Goedgedacht Trust, spoke about the organisation’s successful Path Out of Poverty (POP) programme which involves a long-term 25-year commitment to rural community members involved in the programme, equipping them to survive in their own context as a more realistic approach to focusing on job creation. Finally, four of WESSA Western Cape’s Friends Groups and a number of youth members spoke about ongoing local volunteer initiatives, providing a regional interpretation of the “Visions of Sustainability” theme.

The formal AGM proceedings included reports by WESSA CEO Dr Thommie Burger and Chairman Dr Richard Lewis, which provided an overview of the organisation’s achievements over the past year.  Outgoing WESSA Board members, Dianne Perrett and Dr Jim Taylor, were acknowledged at the event for the valuable contributions that they have made to WESSA over many years. 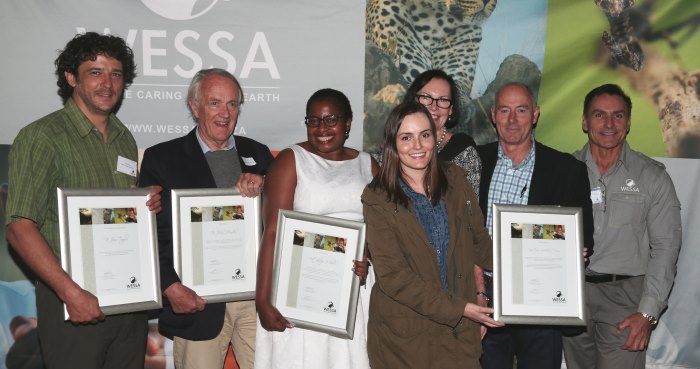 The full 2015 WESSA Award winners and citations follow below.

In recognition of over 50 years of dedicated conservation work in Southern Africa, manifested in a remarkable career that stands out as being one of the most dynamic and effective in the region.  His many significant achievements, combined with his continued contributions to the field of environmental conservation have made Dr Hanks an outstanding example of living up to the motto of “People Caring for The Earth”.

In recognition of the contribution she has made to conservation and environmental education in South Africa through her work across a range of broadcast media, with particular reference to the 50ǀ50 programme, as well as her engagement with schools and corporate organisations. Ntokozo’s passion and enthusiasm has attracted and inspired a community of people from very diverse backgrounds, while her numerous achievements have illustrated her strong and commendable commitment to the conservation of our natural environment.

In recognition of his admirable action taken to draw attention to the water quantity and quality issues faced by two of South Africa’s longest and most important rivers, by organising and participating in the TriWaters Tour expedition in early 2015. Despite the many setbacks encountered along the way, Franz’s perseverance, adaptability and resilience saw him succeed in his mission to raise community awareness about – and draw considerable media attention to – the serious water challenges South Africa is facing. 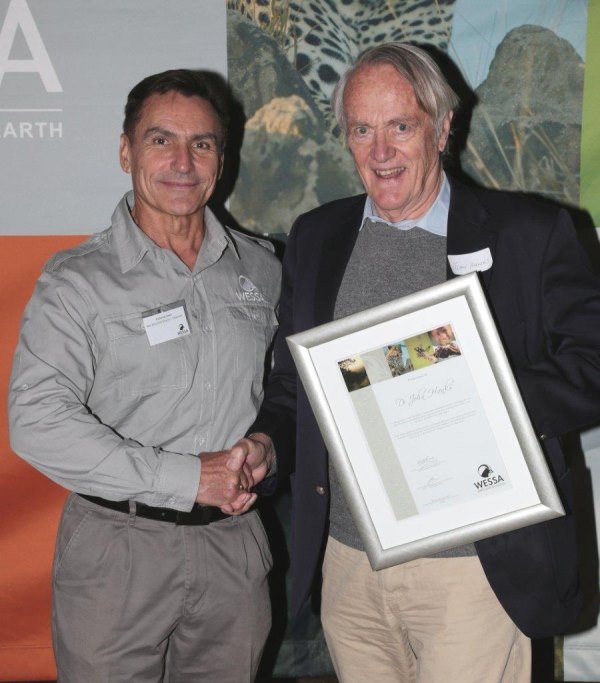 In recognition of the excellent work undertaken by the group for the benefit of environmental conservation in their community, through action taken to ensure compliance with environmental legislation. They persevered, despite strong adversity, and stood together to prevent a potentially harmful and unauthorised development. Their determination and ultimate success is an inspiring example of how the efforts of a small group of people can make a significant difference.

In recognition of their ongoing commitment to the environment by promoting and encouraging the environmentally-responsible management of used lubricating oils and related waste in South Africa, in addition to their commitment to environmental education at schools. The unique collaboration which they initiated, has seen cooperation between many of the key players in the industry to voluntarily form, and finance, an organisation to solve an important environmental problem, and has been used as an inspirational model for lubricant industries in many other countries.