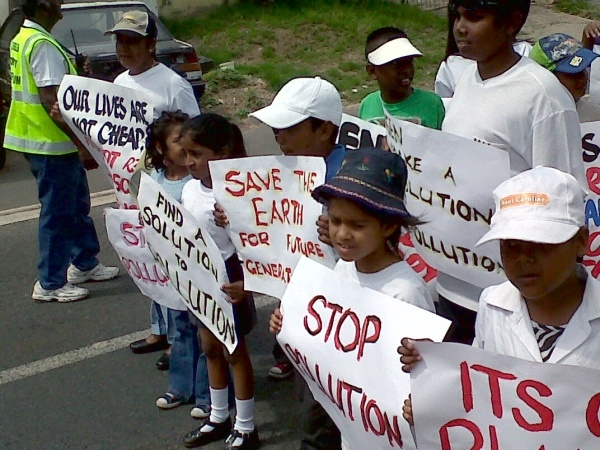 It’s Saturday morning and eleven year old Amina wears a white uniform –  splattered with crude oil stains. Amina and about 10 other children hold up placards as they lead the way in a protest march against a prominent oil company. Engen Oil Refinery is based in the heart of Merebank and Wentworth, in the South Durban Basin.

At least 100 people are braving the blazing Durban heat to join the march. The heat is surpassed by only one thing – the ire of a community who have had enough. On 22 October, amidst a flurry of placards, loud hailers and marshals, the beleaguered residents began their march from Settler’s School to the main gates of Engen Refinery.

Just two weeks prior to the march, an explosive fire broke out sending a shower of crude into the air, which rained down on school children from the neighbouring Settlers School. Children had to be rushed to hospital, after the horrific incident left them complaining of shortness of breath, itchy skin and eyes. 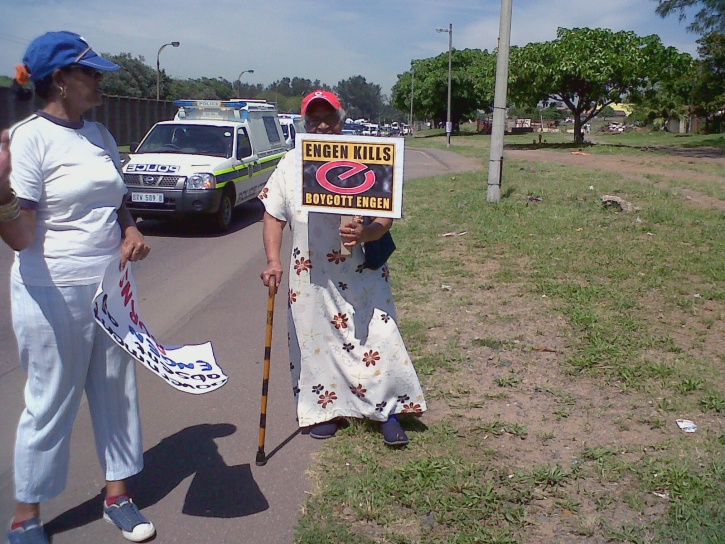 Host of crimes they live with

It isn’t the first time the neighbouring communities have felt the filthy presence of this company. Des D’Sa, coordinator of the South Durban Community Environmental Alliance, (SDCEA), wears a t-shirt listing a host of Engen crimes. Among these are employee fatalities, fires, leaks and violations of SO2 emission regulations.

Amina’s mom points to her uniform – “I have soaked the uniform in jik but the stains just won’t come out”. The very same substance made contact with the children’s skin. The parents in South Durban frequently seek medical attention for their children. Asthma, cancer and skin disorders are frighteningly commonplace in this neighbourhood.

Marlene McClure rattles of a list of cancer sufferers and fatalities in her immediate family. “My sister had skin cancer, my other sister had half her stomach removed from stomach cancer and my sister’s grandson, Tye, was 3 when he died of a brain tumour.”

As I walk alongside mothers and grandmothers, I feel a strong solidarity towards these passionate womenfolk. Ten years ago I lived in Isipingo, close to SAFREF, another major refinery in South Durban. Noxious fumes were a constant. As a mother of two young children, I had often eyed the billowing refinery with wary mistrust.

Maureen Manual, 77, great-grandmother of 13, is marching for future generations. She has lived here most of her life, witnessing the pollution and the disregard with which the Malaysian owned Engen has conducted business. The community has suffered because of the proximity to the refinery but has had little recompense.  According to one resident, “They employ people from far away, [but] our people just get killed.”

Adding insult to injury, Engen attempted to compensate for the effects of the explosion by offering the families of the victims a R30 voucher. As one mother muttered, “R30 won’t even buy me washing powder”. 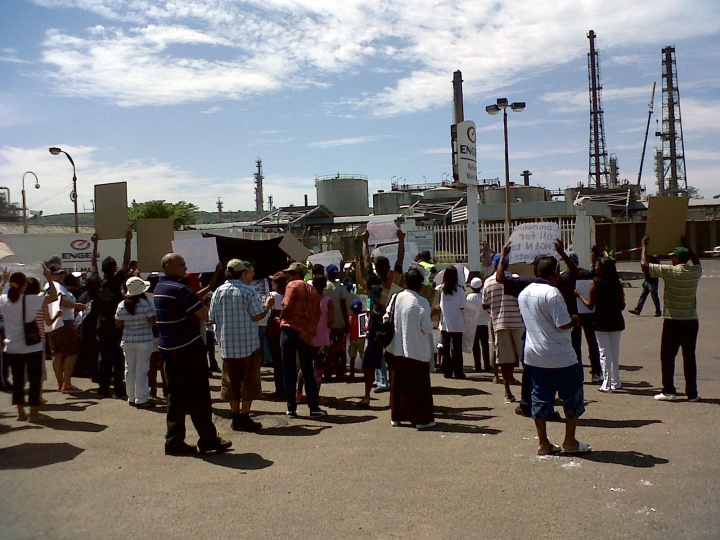 SDCEA and the Centre for Civil Society had organised the march to put forward a memorandum to Engen.

Some of the demands included:

After a peaceful and well-marshalled march to the main gates of Engen Refineries, the community waited to voice their demands. The memorandum was signed by Government officials, however, Engen would not meet the delegation. The disappointment of the people was palpable, but they were not going to back down just yet. Their fight is ongoing, a battle for the basic wellbeing of their families. 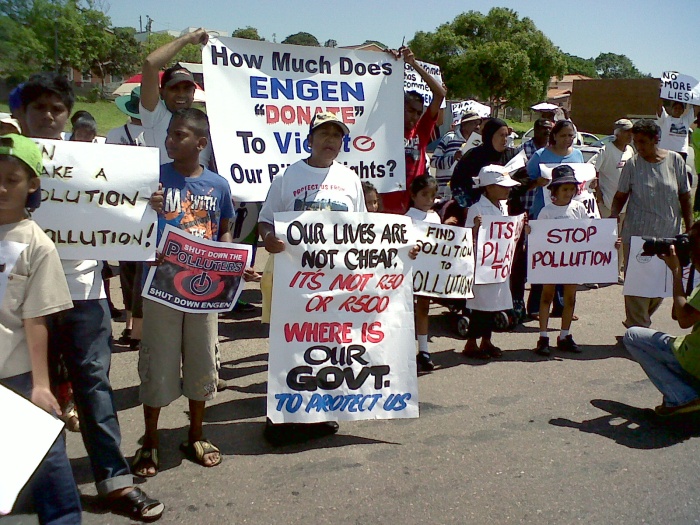 After several attempts to locate Groups Communications Manager for Engen Oil, Tania Landsberg, I was eventually given the number for Bulelwa Payi, the company’s communications executive. In response to an email sent to Bulelwa, this was Engen’s official position on the incident and the demands of the community.

“We are fully aware of the complaints about stains left behind on school clothes, washing hanged out to dry and home walls in Merebank following the small fire incident at the Refinery on October 10.  The Refinery’s 24 hour call centre managed and logged all  complaints. Insurance assessors were also engaged to help with the process. Of the 1 086 complaints received 749 have been assessed and are in the process of being resolved. It is expected that the process of resolving all complaints received will be completed by the end of the month. Engen sincerely regrets the inconvenience and concern caused by the fire that was brought under control in just over half an hour by the Refinery’s well-trained fire fighting team supported by City Emergency Services. 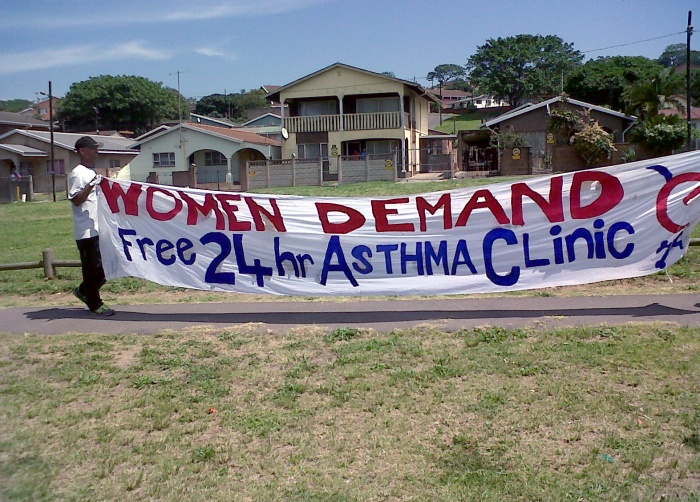 Engen is continually investing in doing business in a sustainable and responsible manner. We are in full compliance with all environmental legislation and will also adhere to any new requirements introduced.  The company has reduced its sulphur dioxide emission by 77% since 1998 and is continuing to focus heavily on improving all areas of operation.

The issue of an asthma clinic is a matter that must be raised with the regional health authority as Engen is not a licensed medical service provider. Engen, along with its industrial neighbours, has contributed to the process of upgrading conditions and amenities at existing health facilities in the South Basin and will consider further interventions based on the merit of the proposal and community needs.”

Subsequent to the march, Department of agriculture MEC, Lydia Johnson, issued a warning to Engen Refineries, to either ‘clean up their act’ or face prosecution.

SDCEA will have a follow-up meeting with feedback from the MEC towards the end of the month. Des D’Sa has stated that Engen will be notified of the meeting.

To date, the refinery has not been in contact with SDCEA.