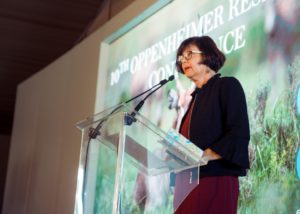 Conservation consciousness and environmental literacy are key to securing an environmental future for all people, says the Minister of Environment, Forestry and Fisheries, Ms Barbara Creecy.

”Conservation consciousness cannot be the exclusive domain of a select and privileged few. It must be a key component of our environmental literacy,” said the Minister during her keynote address to the 10th Oppenheimer Research Conference in Midrand.

The Research Conference is being held under the theme of “Advancing Conservation Consciousness”, which is important in light of the need to raise the level of national awareness about the environment.

Minister Creecy announced that, following research by the Department and the CSIR, the Department was exploring the concept of a Citizen’s Environmental Awareness Index based on the results of an annual independent national public environmental awareness survey.

The development of the Index would be a first for South Africa – a country where no previous specific national surveys on the level of environmental awareness amongst citizens has been conducted. This includes on water and waste services and climate change awareness.

The Minister on 23 September attended the 2019 UN Climate Action Summit held at the United Nations Headquarters in New York. The summit aimed to boost climate ambition to accelerate action to implement the Paris Agreement on Climate Change and ensure that all nations collectively prevent the mean global temperature from rising by more than 1.5 degrees above pre-industrial levels.

“I believe this because everyone’s lives will be impacted on by these realities. Each and every one of us needs to understand these processes, so we know what we can do individually and collectively to remedy the situation,” she said.

Developing an understanding of ‘conservation consciousness’ among ordinary South Africans is essential if government is to measure how effective any of its consciousness-raising efforts have been, or will be, said Minister Creecy, adding: “What we do know already suggests that we have our work cut out for us”.

“It is our intention to change this situation. We want all our citizens to understand that climate change, loss of bio-diversity and environmental degradation are happening now; that these phenomena are highly undesirable; that we as human beings are primarily responsible and most importantly; that we can do something and we can do it now,” said the Minister.

An environmentally literate society is one where everyone has the understanding, skills and motivation to make responsible decisions that consider her or his relationships to natural systems, communities and future generations.

Ms Creecy said in the medium to long term, government would only be able to develop and implement progressive environmental policy in a receptive environment.

She emphasised the importance of evidence-based policy-making, saying it was unfortunate that “across the world we are witnessing the blatant disregard and/or arrogant gainsaying of science by some of the planet’s most powerful people”.

“This requires that all of us take steps to re-affirm the centrality of evidence based policy-making in our own discourse,” she said. It is important to note that evidence is made up of a range of components – not only scientific – and it is never used in isolation”.

The government believed that policies based on evidence were more likely to be better informed, more effective and cost-efficient than policies that are formulated through typical time- and politically-constrained processes without evidence input.

“Without abdicating our own responsibility, and running the risk of sounding trite, I want to argue that making environment, biodiversity and climate issues everyone’s issue, is not the work of one government department, it is the work of the nation,” she said.

Minister Creecy called on the research community to identify, explore, forge, create, operationalise, inspire and inform the societal partnerships that are needed to secure an environmental future for all.