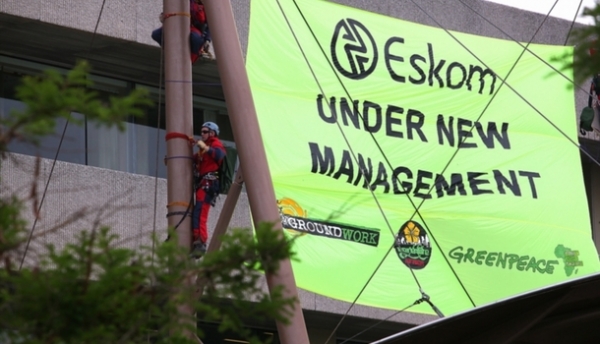 Environmental activists chained themselves to the entrance of Eskom’s Megawatt Park in October 2012 to protest tariff increases. Image: Gallo

Environmental NGOs Earthlife, groundWork, and Greenpeace have suspended their participation in Eskom’s NGO forum following reports that Eskom contracted an intelligence company to spy on the organisations.

“Eskom’s shocking move highlights the deep rot within the organisation that takes us back to the dark days of apartheid. If we cannot trust Eskom’s leadership to deal openly with those that are pushing it towards sustainable practices, how can we trust them with such an important asset as our energy provision? We demand a change of Eskom’s leadership,” said groundWork’s Director Bobby Peek.

“Eskom has demonstrated that it is a completely unscrupulous organisation both in terms of its energy choices and ethical standards,” said Michael O’Brien Onyeka, Greenpeace Africa’s Executive Director.

“Spying on civil society cuts against the essence of South Africa’s democratic principles, is a violation of basic human rights, and a move to silence civil society. Greenpeace demands an urgent independent investigation into the matter. We clearly cannot trust Eskom to police itself.”

“Eskom has no right to spy upon citizens of this country, and such activities belong in our past with the dread of the Bureau of State Security and the National Intelligence Service. A significant part of our liberation was the abolition of such heinous acts and entities, and Eskom owes this country an apology for its disgraceful behaviour,” said Tristen Taylor, Director of Earthlife Africa-Jhb.

“While Earthlife Africa Johannesburg disagrees with Eskom’s dirty generation choices and anti-poor tariff increases, we are entitled to such democratic, legitimate dissent. There is a little thing called the Constitution, we suggest Eskom reads it.”

The civil society groups demand an independent investigation to block what is a classic case of oppression of civil society by big business. Until outcomes of the investigation are made public, the organisations will temporarily withdraw from Eskom’s Stakeholder forum and wait for: