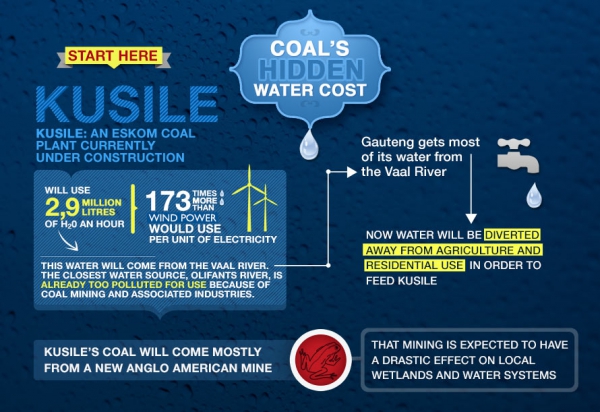 Eskom is in the running to win the international award for this year’s worst corporation in the annual Public Eye Awards, taking place parallel to the World Economic Forum.

Eskom has applied for two-thirds of its coal-fired power stations to be exempt from and/or postpone complying with the law on air pollution standards (minimum emission standards) put in place to protect people’s health.

Greenpeace Africa and groundWork have taken these applications as a flagrant disregard for people’s health. Thus, a joint submission was made to the Public Eye Awards to nominate Eskom, which has now been shortlisted with seven other corporations internationally.

“Instead of helping to solve local pollution and reducing greenhouse gas emissions, Eskom spends our money on expensive, dirty energy. It is selling out both South Africa and the world.”

During the Switzerland-based World Economic Forum – taking place next year from the January 22 to 26 – ways will be discussed to increase deregulation of global markets and enable transnational corporations to gain further strongholds over the natural resources, livelihoods and labour of marginalised people across the world.

At the same time, the Public Eye Awards – hosted by Greenpeace Switzerland and the Berne Declaration – will be exposing the violations of certain corporations.

“The health impact of coal power stations is severe and the resulting financial cost to the state is massive,” said Bobby Peek, Director of groundWork.

“Pollutants generated from coal combustion have major effects on the health of communities, particularly the most vulnerable such as the elderly, the young and pregnant women.”

According to a study conducted by the University of Pretoria, the estimated external public health cost resulting from Kusile in Mpumalanga, will be over R180m, and 51% of hospital admissions in this province are from power generation activities.

The voting period started on Tuesday, giving the public the power to vote for the worst corporation.

Melita Steele, energy campaigner for Greenpeace Africa called on South Africans and the world to vote.

“According to Section 24 of the constitution, South Africans are entitled to an environment that is not harmful to their health or well-being,” said Steele.

“Eskom’s application to be exempted from complying with air quality legislation clearly puts people’s health and well-being at risk, while giving the utility a license to pollute for the foreseeable future.”

Steele said it is important to remember that Eskom’s application to pollute can still be stopped.

“It is vital that South Africans demand that the utility complies with air quality legislation by voting in the Public Eye Awards.” said Steele.