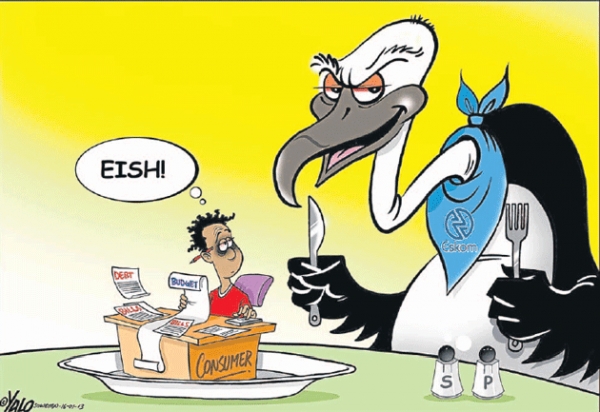 Economists and industry experts have attacked Eskom’s price increase request of 16% a year for the next five years, saying this is not justified. At one of several public hearings being held across South Africa during January 2013 economist Brian Kantor said Eskom is demanding an exceptionally and unnecessarily high real return on the capital it has invested. By extension its pricing application is excessive.

This view is shared by Mike Rossouw, the chairman of South Africa’s Energy Intensive Users Group (EIUG), whose members account for some 44% of the national electricity usage. Rossouw and the EIUG propose about a 11% annual increase over the five year period as being sufficient to sustain Eskom.

The main difference between the EIUG’s and Eskom’s models is that Rossouw does not believe a targeted 8% return on assets is justified for what is essentially a public utility monopoly. This is while energy intensive industries in South Africa are already becoming internationally uncompetitive at existing electricity prices, let alone prices after the proposed increases.

A presentation by Kantor and former MD of Credit Suisse London, David Holland, indicates how, following increases to date, Eskom’s existing real rate of return reached an internationally competitive level of 3.3% by March 2012. This is similar to the average of the long-term real return of the world’s largest 100 electricity companies over the past decade. The argument is that if the 3.3% rate of return which Eskom is now achieving at ZA61c/kWh is maintained this would be sufficient to justify investment in additional capacity.

Eskom’s desire is to have a strong enough balance sheet that can enable it to access global capital markets at good rates in its own right. However, Rossouw points out that recent downgrades of Eskom by international ratings agencies are linked to national downgrades, based on a jaundiced view these agencies have on potential policy and political trends in South Africa. These are national issues and must be sorted out by South Africa, and do not justify Eskom’s expectation of ensuring for itself such a powerful balance sheet.

Furthermore, substantial costs built into current pricing should fall away in time and while Eskom has committed to improving cost efficiencies by R30 billion it has not said how and where. Costs that will fall away once power stations such as Medupi and Kusili are running are the funds used for buybacks of power by Eskom from energy intensive industries, to enable its on-going maintenance catch-up programme.

The first unit at Medupi should be in operation by the end of 2013 while the MYPD3 period which the price increases cover will extend from April 2013 to 2018. For the same reason, so too will the costs improve over time during the MYPD3 period for expensive gas peaking plants being run for long hours daily due to the current electricity crisis.