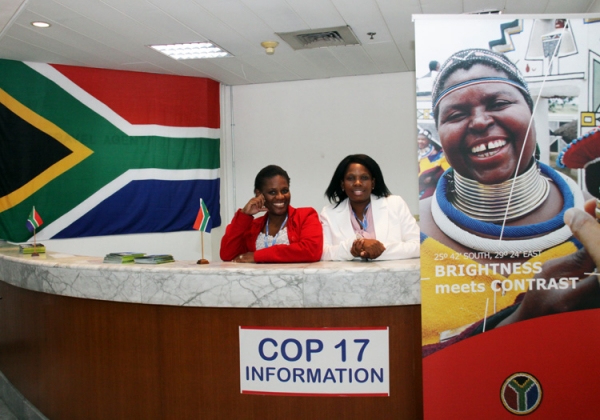 Transport authorities are confident that there will be no unnecessary traffic delays or problems during the upcoming UN Climate Change Conference (COP 17) in Durban from 28 November to 12 December 2011.

With more than 20 000 people expected to at the United Nations climate change meeting, the city will be increasingly busy and Roads Systems Manager at the eThekwini Transport Authority, Carlos Esteves, says plans have been put into place to manage traffic during this period.

“Roads that will be closed for the entire period are: Walnut Rd – Bram Fischer to AB Xuma and one lane on Bram Fischer, Stalwart Simelane and AB Xuma around the International Convention Centre (ICC). The city centre and the area immediately around the ICC precinct will also be completely closed to traffic from 8 November to 12 December, but other than that it’s business as usual,” says Esteves.

An airport shuttle will be in operation from 17 November to 14 December and is open to non-delegates at R130 per single journey. It will stop at Gateway, Umhlanga and the Beachfront en route to its final destination at the Central Transport Hub at the centrum site in the city centre,” says Esteves.

bus stops along all routes

Specially marked COP 17 bus stops will be identifiable along all routes. In addition, eight Durban hotels will be selling tickets and will be available from the concierge. COP 17 delegates will be able to travel on all the shuttle buses for free by showing their delegate accreditation on embarking.

New designated bike lanes have also been increased for those delegates who wish to ride to the ICC precinct.

“The first route starts at the Beachfront and follows a route through town to the Climate Change Response Expo then on to the Durban Botanical Gardens. The other route runs from uShaka Marine World on the northern book-end of the Durban Beachfront, along the Golden Mile, to the Durban Green Hub at Blue Lagoon,” says Esteves.

Accredited media will be accommodated at the Moses Mabhida Stadium parking in Battery Beach Road, opposite the Kingspark Swimming pool (Mustering Fields parking), from where they can catch the “People Mover” shuttle to the Workshop. In addition, they can make use of a shuttle to the Central Transportation Hub. Travel on the People Mover is free for accredited delegates on presentation of a delegate card.

“The general public will have access to parking at the various parking garages in the city and open parking along the Beachfront. From there, a short walk or use of the People Mover will get them to the CCR Expo site,” says Esteves.