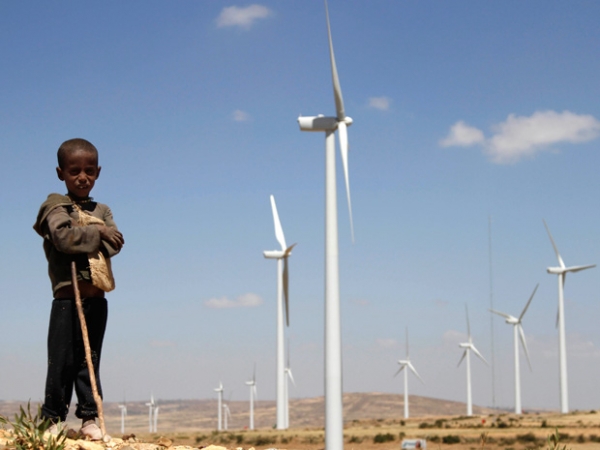 The Horn of Africa country – plagued by frequent blackouts – plans to boost generating capacity from 2,000 MW to 10,000 MW within the next three to five years, much of it coming from the 6,000 MW Grand Renaissance Dam under construction on the Nile.

The plan also consists of raising wind power generation to more than 800 MW and geothermal capacity to less than 100 MW.

“Various studies have proved that there is potential to harness abundant wind energy resources in every region of Ethiopia. We cannot maintain growth without utilizing the energy sector,” Prime Minister Hailemariam Desalegn said in a speech at the launch.

Experts put Ethiopia’s hydropower potential at around 45,000 MW and geothermal at 5,000 MW, while its wind power potential is believed to be Africa’s third-largest behind Egypt and Morocco.

Groundbreaking for the Ashegoda Wind Farm was done in 2009 with completion set for 2011 but logistical constraints delayed its finish. It is the second such project in the country after the 51 MW Adama I wind farm, which began production in 2011.

“Ethiopia might have one of the most impressive investment plans in renewable energy in Africa,” Vergnet’s site manager Roman Coutrot told Reuters.

“It’s not only talking, they are acting and signing contracts. The problem they might face is financing but they are not worried about that,” he said.

The 120 MW, 84-turbine farm – straddling a sprawling field of grassland dotted by stone-brick hamlets more than 780 kilometers north of Addis Ababa – is part of a plan to mitigate the impact of dry seasons on the country’s dams.

“It compliments hydropower, which is seasonal. When you have a dry water season we have higher wind speed,” said Mihret Debebe, CEO of the Ethiopian Electric Power Corporation.

“There is harmony between the two sources of energy.”