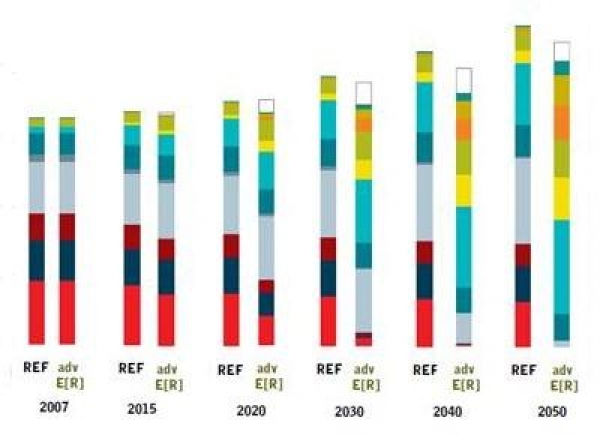 Greenpeace energy campaigner Louise Hutchins said: ‘Governments confronted by soaring energy prices and nuclear risks are right to revise their energy plans. Europe can rapidly replace scores of reactors with safe, clean renewable power and energy efficiency without the need for a dash to coal. Stepping up Europe’s 2020 climate target to 30 percent would further boost a competitive renewable industry and drive the creation of tens of thousands of much-needed European jobs.’

She added: “Nuclear stress tests are increasingly looking like a fig leaf. Since when did nuclear safety checks become voluntary?’

Nuclear phase out – how fast can Europe go?

Nuclear energy provides 16 percent of global electricity and less than six percent of all energy consumed. In the EU, nuclear capacity has declined by 7.6GW in the last decade, while more than 100GW of renewable energy has been installed.

The Energy [R]evolution study from the German Aerospace Centre shows that most of the 48 nuclear reactors built in the EU before 1980, with a total capacity of 34.7GW, can be closed by 2015. The shortfall in energy can be filled by boosting renewable energy and improving energy efficiency. By 2020, 73GW of old nuclear reactors can be closed without compromising CO2 emission reductions of 30 percent compared to 1990 levels.

Following the Japanese nuclear crisis, there has been an immediate closure of seven reactors in Germany. The German Environmental Agency (UBA) has said that the short-term phase-out of these seven reactors can be achieved without any increase of CO2 emissions or using more coal power plants. The UBA estimates that a total German nuclear phase-out is possible by 2017. The German Renewable Energy industry body Bundesverband Erneuerbare Energie (BEE) says renewable energy would be ready to provide 47 percent of German power by 2020, more than compensating for the nuclear withdrawal planned by 2021 at the latest.

A record amount of renewable electricity capacity was installed in the EU last year, 22.6GW (compared to 17.3GW in 2009 and 13.3GW in 2008). EU governments expect the share of renewable energy to reach 20.7 percent of gross final energy consumption by 2020, which translates into approximately 34.3 percent of electricity consumption. It is expected that 16 countries will exceed their 2020 renewables targets – Austria, Bulgaria, the Czech Republic, Denmark, France, Germany, Greece, Hungary, Latvia, Malta, the Netherlands, Poland, Slovenia, Slovakia, Spain and Sweden.

A fully renewable European energy system would require a total of 1.8 trillion additional energy investments until 2050, but would deliver total fuel costs savings of 2.6 trillion and yearly electricity savings of 132 billion compared to a business as usual scenario with nuclear power and coal, according to the Energy [R]evolution report. Such investment would give Europe a global competitive advantage in green technology and hundreds of thousands of additional European jobs. By 2020, there could be 940,000 new green jobs, increasing to 1.2 million new jobs in 2030. Job losses in the nuclear and fossil fuel sectors are more than compensated by growth in green sectors.

At the March EU summit, European leaders will discuss voluntary stress tests for Europe’ nuclear plants. Greenpeace argues that for the tests to amount to anything more than a fig leaf, the EU should ensure that they are compulsory, transparent, independent and lead to the rapid closure of plants which fail. European leaders are set to ask national authorities to carry out the tests. But to be transparent and rigorous, they should also be peer reviewed by other members of the European Nuclear Safety Regulators Group (ENSREG)and independent experts. Furthermore, Greenpeace believes that it should not be the taxpayer which pays the bill for nuclear disasters. The industry should be made to bear all costs of decisions to build nuclear plants.