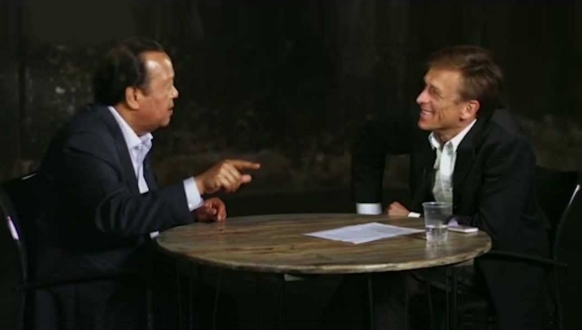 In 1981 The United Nations established an International Day of Peace. This day , September 21st, is now observed in over 200 countries and is supported round the world by volunteers and organizations.

To bring awareness to Peace Day 2014, the thinkPEACE Network will promote a Peace Day Comedy program, “Stand-Up For International Peace,” to be held in over 50 global comedy clubs. The Waves Of Kindness Global Initiative celebrates the United Nations International Day Of Peace though global meditation events.

As a contribution to Peace Day , and to further encourage people everywhere to recognise the importance of the topic of peace in our lives, cinemas around the world are being invited to screen ‘Peacemakers: Jeremy Gilley in conversation with Prem Rawat.’ The 66-minute film features these two leading Peacemakers – it is a profound, moving yet humorous exchange that will both engage and challenge the viewer.

The two Peacemakers first met during the European Parliament’s “Peace and Wellbeing” conference in 2011, during which they both signed “A Pledge To Peace”. The aim of this project is to promote and develop peace and peace education in order to enhance the wellbeing of all people and was inspired by Prem Rawat’s message of peace. Their relationship developed due to their mutual understanding of the necessity of peace as a natural part of any human life. This relationship led to their agreement to be filmed during an informal exchange of views about the nature of peace, its importance and how peace might be spread.

Prem Rawat, is an internationally recognized speaker, who for 52 years has been presenting the possibility of peace to people around the world. His discourses touch on the core of our human existence. Due to the uniquely inspiring nature of his message and the lively, humorous style in which it is presented, Prem Rawat is regularly invited to present his message in interviews and at events, whilst a number of governmental and academic institutions have granted him the honorary title “Ambassador of Peace”. “Words of Peace”, the TV program which showcases this message of peace is currently aired in 40 countries on 350 TV stations. For more information on Words of Peace and The Prem Rawat Foundation, the humanitarian organisation founded by Prem Rawat, go to: www.wopg.org and www.tprf.org.

Jeremy Gilley is a British actor turned filmmaker, who founded “Peace One Day” in 1991, a non-profit organization endorsed by various leading figures, including: UN Secretary-General Ban Ki-moon; UN High Commissioner for Refugees António Guterres; and UK Prime Minister David Cameron among others. Peace One Day’s objective is to institutionalise Peace Day, 21 September, creating an annual day of cease-fire, peace and global unity. Since it’s foundation millions of people have been active on Peace Day in every country of the world and hundreds of organisations have carried out life-saving activities in areas of conflict. For more information go to http://www.peaceoneday.org.