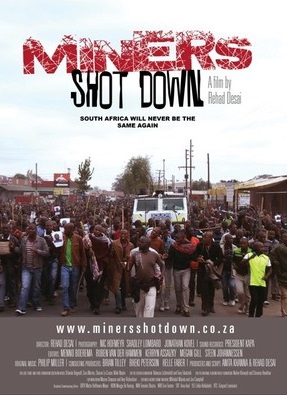 On 16 August 2012, the South African Police shot and killed 34 striking miners at the Lonmin platinum mine at Marikana. For the past six days, the dead and injured men had been fighting for an increase to their meager wages after negotiations with Lonmin management and competing unions had resulted in the resounding silence of stalemate. Only once the first shots were fired, resurrecting painful memories of Sharpeville and apartheid suppression, did the country begin to listen.

Chronicling the days leading up to the strike and subsequent massacre, Rehad Desai masterfully compiles a comprehensive and damning account of complicity between Lonmin, the ANC government and their allies within the National Union of Mineworkers and the police force. One of the most important films of post-apartheid South Africa, Miners Shot Down is essential viewing for every citizen, a battling document that will reverberate for years to come.