Ecosystem Restoration Camps: How to Heal a Dying Planet 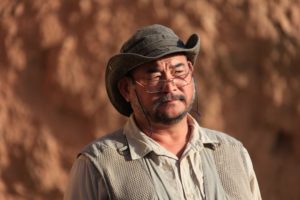 Over the past 150 years, poor land management practices, driven by industrial agriculture, has resulted in the loss of half of the earth’s topsoil. Soil is becoming so degraded that some scientists are predicting that in some parts of the world, such as the UK, we only have 60 harvests left. More carbon has been emitted from degraded soil than from the entire transportation industry.

Without immediate, large scale action, many parts of the world will become uninhabitable in the next 50 years. Conflict over resources such as water and farmable land will become common. Millions of people will either starve or, if they’re lucky, migrate, causing rising tensions in areas where land is still safe to live on.

Example of a Camp design with sustainable food gardens, eco-accommodation for volunteers and landscape restoration activities.

These changes are having a major impact on the living systems that we need to survive. Healthy ecosystems are essential to regulate our climate system, ensuring that there is enough water and nutrients for all of the creatures that depend on them. Sequestering the excess carbon in our atmosphere on a massive scale is one of the last remaining solutions to staving off the worst effects of climate change. By rehabilitating degraded ecosystems and helping farmers convert from industrial to regenerative agriculture, we can sequester enough carbon to create a safe level in the atmosphere (350ppm).

Ecosystem Restoration Camps will help to create action towards this solution by teaching large numbers of people how to restore degraded land, whilst giving them the opportunity to work with local farmers who need support in transitioning to regenerative agriculture. At the camps, people will acquire the knowledge and information they need in order to put theory into practice. This gives farmers who are struggling financially the ability to try regenerative techniques, thanks to the voluntary manual labour, and gives people valuable experience in landscape restoration. Ecosystem Restoration Camps has the potential to give millions of people around the world the chance to reconnect with the natural world, causing ripple effects as they bring this knowledge and connection back into towns and cities across the globe.

Join John for this interactive webinar as he shares his vision and experiences of these pioneering camps and what he sees for the future. You will have an opportunity to comment and ask questions with one of the world’s greatest thinkers on restoration and regeneration! 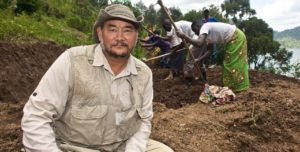 John D Liu is the founder and Chair of Ecosystem Restoration Camps, a visiting Research Fellow at the Netherlands Institute of Ecology (NIOO), and an Ecosystem Ambassador at the Commonland Foundation.

After 15 years as a Television Producer and Cameraman for CBS News, RAI and ZDF John began to study ecology. In the mid-1990’s he began a participatory process with a number of media and broadcasting colleagues in Beijing that led to the creation of the Environmental Education Media Project for China (EEMPC). He has directed the EEMPC (now the EEMP) from its beginning. The EEMPC has distributed over 1000 environmental films in China since then. The EEMPC also helped found the “China Environment and Sustainable Development Reference and Research Center (CESDRRC) and the China HIV/AIDS Information Center (CHAIN). Over the years their activities have broadened beyond China to include the entire world and to include the production of environmental and ecological films. From 2003 – 2006 John was a visiting fellow with the Faculty of Natural Sciences and the Faculty of the Built Environment at the University of the West of England, In 2006 he was named the Rothamsted International Fellow for the Communication of Science, and from 2010 – 2013 John was a Senior Research Fellow for IUCN.

In 2013 he received the Communications Award from the Society for Ecological Restoration (SER) for his film “Green Gold” about the restoration of Loess Plateau; a film about his work produced by the VPRO won a Prix Italia award. “Hope in a Changing Climate” was named the best ecosystem film by the International Wildlife Film Festival and won several other honors. 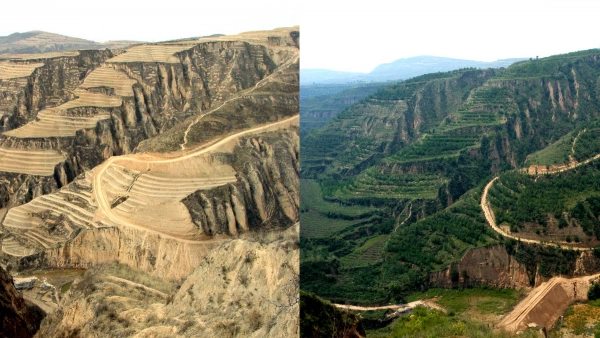 Loess Plateau Restoration before and after, an area the size of Belgium.