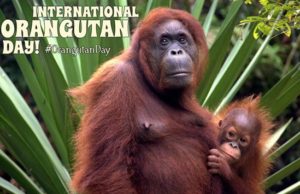 To recognize the most iconic victim of the palm oil industry, International Orangutan Day has been set for August 19th, EVERY YEAR! This event is to help encourage the public to take action in preserving this amazing species.

From 1992-2000, the population of the Sumatran orangutan is considered to have declined by more than 50%. Its relative, the Bornean orangutan population fell nearly 43 percent in the past decade, from 35,000 in 1996 to 20,000 in 2006. Since these studies were done, deforestation rates have continued to climb which means the actual populations could be well below these.

Orangutan Outreach‘s mission is to protect orangutans in their native forests of Borneo and Sumatra while providing care for orphaned and displaced orangutans until they can be returned to their natural environment. If they cannot be released, we will do everything in our power to ensure they have a life of dignity and the best possible long-term care. We seek to raise funds and promote public awareness of orangutan conservation issues by collaborating with partner organizations around the world.