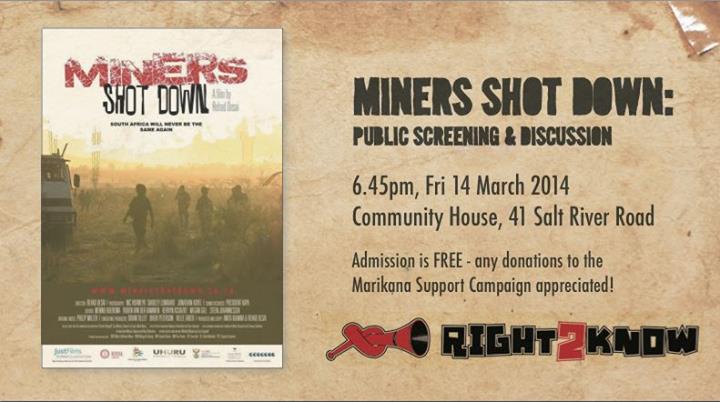 In August 2012, mineworkers in one of South Africa’s biggest platinum mines began a wildcat strike for better wages.
Miners Shot Down is a haunting glimpse into the days leading up to the massacre of 34 miners in Marikana in August 2012.

Using the point of view of the Marikana miners, the film follows the strike from day one, showing the courageous but isolated fight waged by a group of low-paid workers against the combined forces of the mining company Lonmin, the ANC government and their allies in the National Union of Mineworkers.

What emerges is a story of collusion at the top, spiralling violence and the country’s first post-apartheid massacre.

Ten days after its international premiere, the Right2Know Campaign is proud to host a free public screening of MINERS SHOT DOWN as part of our annual National Summit.

If you require transport home after the event, please contact Janine Julisen on janinejulisen@gmail.com with a) the number of people needing transport and b) where you need transport to, before 12pm on Wednesday, 12 March.

Find out more about the film and how you can take action here.