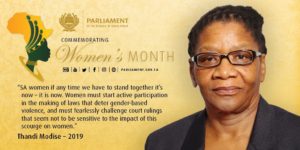 Parliament’s Presiding Officers led by the Speaker of the National Assembly Ms Thandi Modise and the Chairperson of the National Council of Provinces Mr Amos Masondo, join the nation in paying tribute to the courageous and resilient women towards ensuring a free, fair and non-sexist South Africa.

It was on this historic day, 64 years ago, when 20 000 women across all races came together and waged one of the most courageous and boldest challenges against the ruthless apartheid regime over its unjust pass laws.

Today we honour all women who fought for the freedom and democracy we have today and all those who continue to fight for a just, equal and humane world.

This year, the country commemorates this day under the testing and difficult conditions brought about by the global Covid-19 pandemic, including its attendant severe socioeconomic problems. The economic impact, particularly on women, is expected to be profound, as unemployment amongst women continues to be higher compared to men. This month of women serves as a reminder to intensify the battle for gender equality, economic emancipation and social justice to ensure a truly just and equal society fought by the fearless women freedom fighters of 1956.

Reports have illustrated that women are also faced with gender-based violence and femicide pandemic, making them more vulnerable during this period.

As we mark this day, our focus must be a multi-pronged programme to attend to the needs of survivors of gender-based violence, while also dealing with perpetrators of such violence effectively. These goals and ideals can only find practical expression and bring tangible results by the whole society joining hands to fight the scourge. Together, we can build that better world to which so many aspire, and for which many have struggled and died.

In 2019, Parliament hosted a Women’s Parliament, which served as a launch-pad to kick-start Provincial Review Sessions of the 1994 Women’s Charter for Effective Equality. Since then, three provinces have held sessions, Western Cape, Northern Cape and Free State.

Common issues raised in all these provinces was the call for the wheel of justice to turn quickly for all perpetrators of violence, the reviewing of the criminal justice system for harsher sentences, huge pay parities between women and men, unemployment and poverty. The consultation process will culminate in the adoption of improved policy and legislative oversight mechanisms, and interventions to remove all structural, institutional and cultural barriers to the realisation of gender equality in South Africa.

Parliament will continue to intensify its oversight to ensure all interventions against the scourge are realised, and this includes the implementation of the decisions of the Presidential Summit on Gender-Based Violence. Parliament welcomes the recent announcement by the executive to submit the Criminal Law – Sexual Offences and Related Matters Amendment Bill, the National Register for Sexual Offences and the Domestic Violence Amendment Bill to Parliament. Parliament will play its part to ensure these bills are processed once submitted to ensure a safer and secure environment for women.

In response to focused oversight to deal with gender issues, the Portfolio Committee on Agriculture, Land Reform and Rural Development will hold virtual public hearings on the Upgrading of Land Tenure Rights Amendment (ULTRA) Bill. The Bill amongst other issues seeks to address the unfair discrimination of women based on their gender to their right of tenure. Parliament encourages South Africans to fully participate in this law-making process by an oral presentation at the virtual public hearings planned for 18 & 19 August 2020.

During this women’s month, we must as a nation escalate the program for the attainment of a free, fair and equal society in honour of heroic women of our liberation struggle history.

We salute all the women of South Africa.