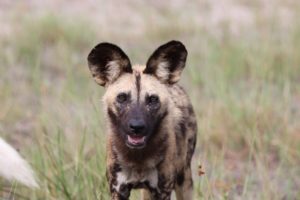 African Painted Dogs are commonly known as wild dogs in Africa. They have distinctive patterns on their fur, and no two wild dogs have the same patterns.

They usually live in large packs, which are dominated by the matriarch. They have an alpha pair (almost like a king and a queen) and these are usually the only ones in the pack who mate.

Once the pups are born, the whole pack looks after them and they take priority. Pups that are old enough to eat solid food are given priority at a kill – even over the dominant pair. 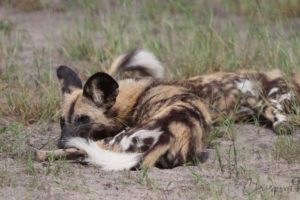 They have massively large roaming areas and are known to roam around 50km in a day.

When hunting, they have about an 80% success rate and hunt in groups which are well coordinated. Their main hunting strategy is to outrun an animal tiring it out over a very long distance. Like with cycling races, when the front runners get tired, then the dogs right behind them pick up speed and the front runners fall back a bit. Usually, after a few kilometres of running, the prey gets very tired and weak, which makes it easier to take down.

It has been documented that they have similar social and hunting habits to wolves. 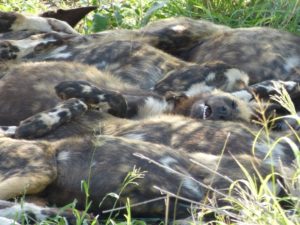 They are sadly an endangered species – they used to range across 39 countries in Africa, with population numbers in the hundreds of thousands. Currently, there are fewer than 6,000 individuals left in the wild, forming fewer than 700 packs.