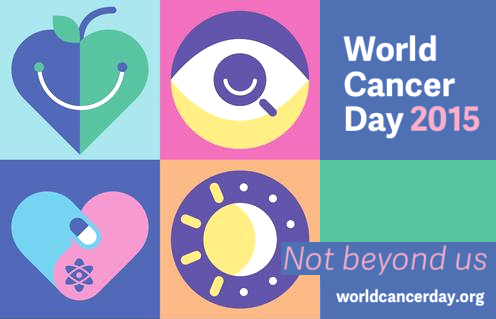 World Cancer Day is marked on 4 February to raise awareness of the global impact of cancer and increase understanding of prevention, detection, treatment and care.

Taking place under the tagline ‘Not beyond us’, World Cancer Day 2015 will take a positive and proactive approach to the fight against cancer. The campaign will highlight that solutions do exist across the continuum of cancer, and that they are within our reach.

The 2015 campaign will be articulated around four key areas of focus:

Cancer is a leading cause of death worldwide. According to the World Health Organisation, there were approximately 14 million new cases and 8.2 million cancer related deaths in 2012.

Cancer is a generic term for a large group of diseases that can affect any part of the body. Other terms used are malignant tumours and neoplasms. One defining feature of cancer is the rapid creation of abnormal cells that grow beyond their usual boundaries, and which can then invade adjoining parts of the body and spread to other organs, the latter process is referred to as metastasizing. Metastases are the major cause of death from cancer.

Cancer arises from one single cell. The transformation from a normal cell into a tumour cell is a multistage process, typically a progression from a pre-cancerous lesion to malignant tumours. These changes are the result of the interaction between a person’s genetic factors and three categories of external agents, including:

WHO, through its cancer research agency, International Agency for Research on Cancer (IARC), maintains a classification of cancer causing agents.

Ageing is another fundamental factor for the development of cancer. The incidence of cancer rises dramatically with age, most likely due to a build up of risks for specific cancers that increase with age. The overall risk accumulation is combined with the tendency for cellular repair mechanisms to be less effective as a person grows older.

Tobacco use, alcohol use, unhealthy diet and physical inactivity are the main cancer risk factors worldwide. Some chronic infections are risk factors for cancer and have major relevance in low- and middle-income countries.

Hepatitis B (HBV), hepatitis C virus (HCV) and some types of Human Papilloma Virus (HPV) increase the risk for liver and cervical cancer respectively. Infection with HIV substantially increases the risk of cancer such as cervical cancer.
How can the burden of cancer be reduced?

Knowledge about the causes of cancer, and interventions to prevent and manage the disease is extensive. Cancer can be reduced and controlled by implementing evidence-based strategies for cancer prevention, early detection of cancer and management of patients with cancer. Many cancers have a high chance of cure if detected early and treated adequately.
Modifying and avoiding risk factors

More than 30% of cancer deaths could be prevented by modifying or avoiding key risk factors, including: