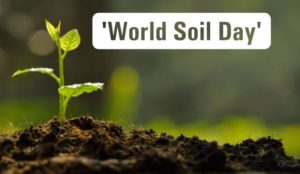 World Soil Day (WSD) is held annually on 5 December as a means to focus attention on the importance of healthy soil and to advocate for the sustainable management of soil resources.

Every 5 seconds, the equivalent of one soccer field of soil is eroded. This alarming fact reaffirms the need to raise awareness through World Soil Day of this growing problem, as the Earth’s population continues to expand.

This year, by addressing the increasing challenges of soil management, the FAO campaign “Stop soil erosion, Save our future” aims to raise awareness of the importance of sustaining healthy ecosystems and human well-being.

By encouraging people around the world to engage in proactively improving soil health, the campaign also aims to raise the profile of healthy soil.

If we do not act soon, erosion will; the fertility of soil will continue to be adversely affected at an alarming rate, threatening global food supplies and food safety.

Encouraging all people to participate, FAO has created a thematic website full of information, initiatives and material to spread the message through different multimedia platforms.

An international day to celebrate Soil was recommended by the International Union of Soil Sciences (IUSS) in 2002. Under the leadership of the Kingdom of Thailand and within the framework of the Global Soil Partnership, FAO has supported the formal establishment of WSD as a global awareness raising platform. The FAO Conference unanimously endorsed World Soil Day in June 2013 and requested its official adoption at the 68th UN General Assembly. In December 2013, the UN General Assembly responded by designating 5 December 2014 as the first official World Soil Day.

The date of 5 December was chosen because it corresponds with the official birthday of the late H.M. King Bhumibol Adulyadej, King of Thailand, who was one of the main proponents of this initiative.