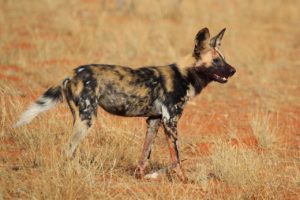 At a one-of-a-kind event in Johannesburg last month, 18 of the 25 South Africans who have summited Mount Everest, and two non-South African summiteers now residing in this country, collaborated in support of conservation.

The event, held at the Hyatt in Rosebank, was attended by more than 160 people and raised over R500 000 for Wild Dog conservation, primarily through an auction of various memorabilia, including an ice pick signed by Sir Edmund Hillary.

Since 1953 just 3 448 people have summited Mount Everest on 5 584 separate occasions. Vaughan de la Harpe has accomplished this feat twice. He describes the experience as sobering and says, “From that elevated perspective you see things as they really are and in that moment little else seems as valuable as our planet and the animals that populate it.”

In recognising the link between summiting Everest and the preservation of nature, Vaughan and the Endangered Wildlife Trust (EWT) put together a fundraising dinner to recognise and celebrate the achievements of South Africa’s summiteers and to raise much-needed funds for Wild Dog conservation. The event followed on from a similar, highly successful dinner in 2010.

The EWT’s head of business development and fundraising, Vanessa du Plessis, says: “Vaughan’s incredible energy and dedication to conservation are an absolute inspiration and the EWT is extremely fortunate to have him as a patron for Wild Dog conservation.”

The African Wild Dog (lycaon pictus) is South Africa’s rarest carnivore and is classified as Endangered, with less than 500 free-ranging Wild Dogs left in the country. The EWT coordinates the ‘managed metapopulation’ approach to Wild Dog conservation in South Africa, which links a series of geographically isolated private and state reserves capable of sustaining Wild Dogs, but which need sustained, intensive, collaborative efforts to manage these subpopulations as one metapopulation.

The metapopulation approach was first used for Wild Dogs in South Africa following recommendations from a 1997 Population and Habitat Viability Assessment and has been successful to the extent that it has exceeded its initial goal of nine packs and there are now about 16 Wild Dog packs in South African metapopulation reserves. This approach is unique to South Africa and there are currently no studies in the region looking at similar issues for this species. However, as habitat for carnivores becomes more limited, it is expected that this management approach will become relevant in other areas of Africa.