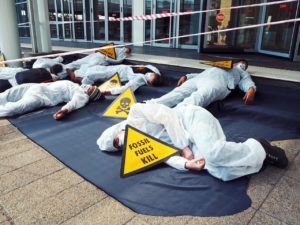 Earlier today, Extinction Rebellion (XR) Cape Town and XR Winelands took non-violent direct action against the Africa Oil and Power conference currently being held at the CTICC, in order to draw attention to the crimes against humanity that the conference is intended to facilitate.

The official website for the conference boasts a “…platform for power pioneers such as Kenya, new explorers like Senegal, onshore producers like South Sudan, and innovative West African players such as Angola and Equatorial Guinea to present projects and get deals signed”.

Funnily enough, no mention is made of the suffering stored up for the world’s most vulnerable with each new fossil fuel project undertaken, nor of the very real threat that fossil fuels pose to organised human civilisation as a whole. 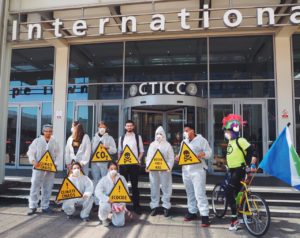 These omissions are especially conspicuous given the particular susceptibility of sub-Saharan Africa to the effects of climate breakdown.

One might expect government and media to be less economical with the truth – apparently, one would be sorely disappointed. Despite clear scientific consensus on the causes and effects of climate change, government and news media have almost entirely neglected their duty to communicate the gravity and urgency of the climate crisis to South Africans, most of whom are still completely unaware of the problem. 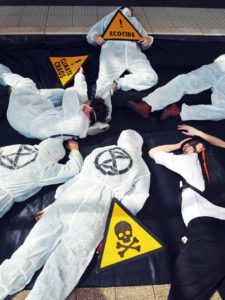 Droughts, floods and fires across the country are reported, but with no mention of the human activity intensifying such disasters. Gas is discovered off our coast, and newspapers uncritically hail the find as a boon for the economy. A cabinet minister tells blatant, Trump-esque lies about “clean coal”, and journalists happily spread the lies far and wide without challenge.

As people of conscience, XR Cape Town felt compelled to bear witness and draw attention to the coordinated ecocide the Africa Oil and Power conference represents, and to the failures of our government and news media to simply tell us the truth about one of the greatest threats our species has ever faced. 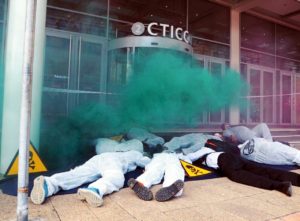