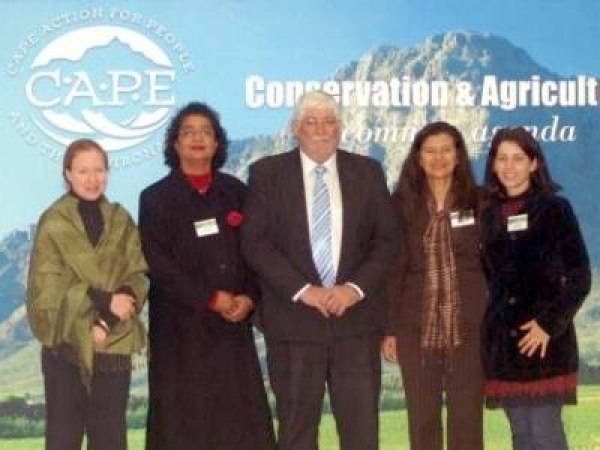 Pressures on our natural capital, such as alien plant species, water pollution and overuse of resources, have caused a chain reaction of negative effects threatening our agricultural sector. Whether it is visible like sedimentation in our dams, or less visible such as fewer effective pollinators, the impact is enormous.

This was said at the CAPE Partners’ Conservation and Agriculture Conference at Elsenburg last week. The conference gave speakers countrywide the opportunity to discuss how they are breaking free from tradition and moving towards one core principle of farming, sustainability.

Soil is one of the most important components of our agriculture. Willem de Klercq, researcher from the Soil Sciences Department at the University of Stellenbosch, says people have different opinions about what healthy soil should look like.

‘There is no standard to which the indicators (such as soil respiration and the presence of earthworms) can be compared. From an agricultural perspective, farmers will say they have farmed a certain way for six generations, and the soil is still good. But will it still be good in 30 years’ time?’

He adds: ‘People should remember that humans and soil are linked, because it is relevant to our health.â€

The other important component of farming is water. Hans King, vice-head engineer from the Agriculture Department at Elsenburg, addressed the problem of river instability.

‘One of our main needs is erosion control. Rainfall patterns have changed and are causing more damage as a result. . In 2007 R350 million went to damages due to flooding.’

King asks three questions: Why are Western Cape rivers so unstable, are the traditional methods of water use sustainable and what are the alternatives?

‘This is due to unstable alien vegetation, displacement of indigenous vegetation, the development of farmlands and urban settlements, bulldozers and accelerated erosion because of steep catchments. Because of erosion, the Buffelsjag River moved 75 metres between 2001 and 2006.’

The traditional methods of farming include bulldozing riverbeds, the construction of levees, (which actually increases erosion) and using longitudinal river training walls that create unnatural, deep and narrow flow patterns.

‘These methods are very costly; they don’t last long and promote river instability.’

King feels these methods fail because they don’t consider the big picture of the river.

‘Some farmers ignore the source and only look at individual dams. They violate basic engineering principles. The value of indigenous vegetation is simply ignored and it’s actually very useful.’

He supports the idea that farmers should look at a holistic river training approach, which includes the use of groins (finger-like structures used to slow the river down) in combination with indigenous vegetation to control erosion.

Japie Buckle, provincial co-ordinator of Working for Wetlands in the Eastern Cape, touched on another agricultural sensitive point, wetlands. ‘South Africa has seen a 35 – 60 % wetlands loss, of which more than 60% was in the Cape Floristic Kingdom.’

‘Wetlands are the plugs in our water drainage systems,’ Buckle says. ‘They dissipate energy, causing an even flow. They act like a sponge and purify water for free. Without wetlands we would have high flood peaks and periods with no water.’

According to Buckle, Palmiet lands play an important role in wetlands’ sufficient draining.

‘Palmiet is perfect for river flow regulation. They cover 3% of our earth’s surface and manage to contain carbon beneath the ground in the form of peat. If we remove Palmiet and expose peat, it starts oxidising and releases all that carbon into the air.’

‘The first step we can take is to protect existing wetlands, because we are losing them fast. We are directly affected by what we do to our wetlands.’

A third of our food needs insect pollination

Few of us consider the importance of pollination.

‘Pollinators are experiencing problems in the Northern Hemisphere. There are definite signs of stress and malnourishment,’ Carol Poole, Project Manager of the Global Pollination Project says.

‘It is however a myth that we will die in four years’ time if there are no honeybees. The bulk of our staple food is wind pollinated, but about a third is insect pollinated, and this includes all our healthy foods. 1 ton crops that are dependent on insect pollination are five times more valuable than those not (such as rice).’

According to Poole pollination affects our food prices and choices.

‘Seed plants, lusern, flowers, biofuels and fynbos are affected by pollinators. 83% of our fynbos are insect pollinated.’

It is hard to measure the value of pollination, because some consider it essential for food security and others believe it simply contributes.

‘Pollination value results show that it is worth 153 billion Euros per year. This amounts to 9.3% of the value of food.’

Apart from the Global Pollination Project, SANBI is also currently involved with the Honeybee Forage Project to support our pollinators.

Trenly Spence is a holistic manager on a Graaff-Reinet farm. ‘If you look at the whole picture, you realise it is pretty pointless to fight nature.’

Spence points out that some of the cattle species that breed in South Africa actually evolved in Europe and that we shouldn’t expect them to adapt to our African climate. He suggests farming with Ngunis and other indigenous animals that are well adjusted to survive African conditions.

‘We should all try farming with nature. Just let it lead the way.’

Spence embraces the indigenous plant species on his farm and steers clear of pesticides. Natural pest control saves the United States 3.6 billion dollars in one year.

‘Sheep, goats, calves and cattle can run together, they protect each other. I might not have scientific proof of this, but it’s worked for me. On that note, people should realise that predators are not necessarily rogue animals and shouldn’t prevent them from entering their farms.’

Spence says that he only uses electric fencing as a last resort on his farm because he wants his farm to be as natural as possible. ‘Other farmers are following my example of natural farming and they don’t lose anything in droughts anymore.’