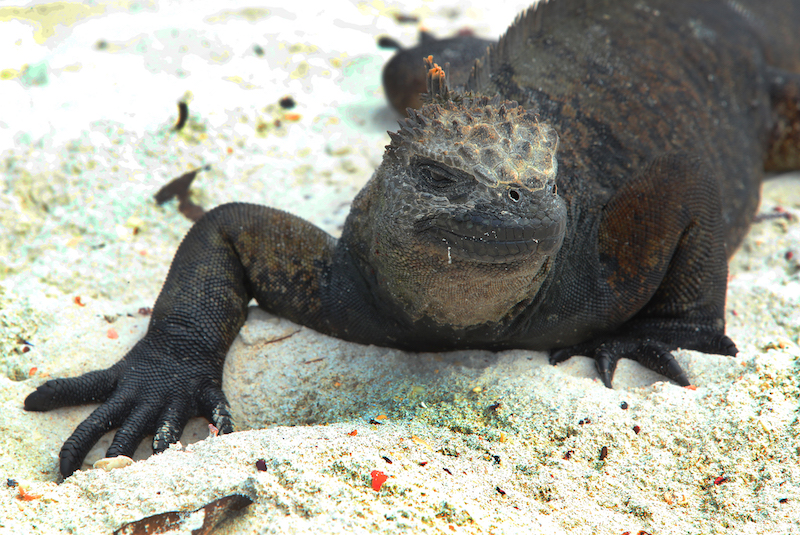 The marine iguana (amblyrhynchus cristatus) is a species of iguana found only on the shores of the Galápagos Islands, in Ecuador. The total population is estimated to be 250,000. This hassi is endemic to Santa Cruz Island. Image: UN Environment

When the clean-up volunteers in the Galápagos Islands came across a soda can with a brand from Indonesia, they were hardly surprised. For months, they had been cleaning the remote beaches of these iconic islands 600 miles off the coast of Ecuador and removing tonnes of plastic waste, much of it carried to the islands from other corners of the planet.

This emblematic Ecuadorian archipelago, which inspired Charles Darwin’s theory of evolution, is no stranger to the global plastic tide. The garbage that washes up on the islands’ beaches threatens vulnerable ecosystems, as well as the people who depend on those ecosystems for their food and livelihoods.

With an area of 138,000 square kilometers, the Galápagos Marine Reserve is one of the largest in the world. The islands are home to more than 2,900 species, many of which are found nowhere else in the planet: 86 per cent of the islands’ reptiles are endemic, as are 27 per cent of the mammals and 25 per cent of the birds. Cormorants, marine iguanas, penguins, sea lions and the famous Darwinian finches and giant tortoises are among the archipelago’s iconic species. Due to its important ecological, cultural and economic wealth, the Galápagos was declared a UNESCO World Heritage Site in 1978.

But humans are altering this pristine ecosystem: plastic rubbish was recently found in the nests of finches, as well as in the stomachs of sea turtles and albatrosses, as part of an investigation conducted jointly by the Directorate of the Galápagos National Park and the San Francisco University of Quito.

The plastic disintegrates into microparticles, which are impossible to collect but which nevertheless enter the food chain. “Many animals confuse [bits of plastic] with the eggs of the marine species they normally eat,” explains Jorge Carrión, director of the Galápagos National Park.

It is estimated that up to 13 million metric tons of plastic are dumped annually in the seas of the world. At least 50 per cent of that garbage is made up of disposable plastic, which can persist in the environment for up to 500 years.

The Galápagos authorities have taken significant steps to tackle plastic pollution on the islands, and have gone so far as to declare 2018 the year of the fight against plastic pollution – bringing together the efforts of governments, scientists and citizens.

A waste management programme on Santa Cruz, the most populated island, has achieved up to 45 per cent recovery of recyclable solid waste, the highest in Ecuador. Products such as plastic bottles and cans are sent to the Ecuadorian mainland for recycling, while other products, such as glass bottles, are reused locally. In a 2015 resolution, the Governing Council of the Special Regime of the Galápagos banned plastic bags with handles from entering the islands, and the authorities hope to introduce restrictions on other single-use plastic items.

Residents also take part in regular beach clean-ups across the islands. At a recent event on some of the islands’ most remote beaches, some 2.5 tonnes of trash were collected. 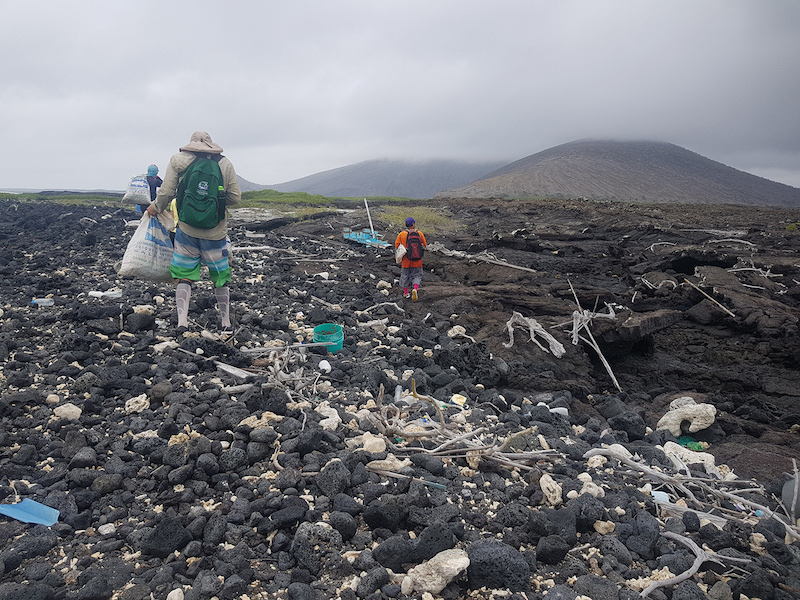 “In Ecuador, we promote a new development paradigm, based on a balance between the human being and nature,” said Tarsicio Granizo, Ecuador’s Minister of the Environment. “Galapagueños are an example of how an informed citizenry understands that biodiversity is a strategic resource and, therefore, has the impulse to actively fight against marine pollution.”

Fishermen in the Galápagos, who depend on the sea to survive, have not stood by idly. They are working to stop the use of plastic nets and are actively collecting underwater rubbish themselves.

Alberto Andrade, a member of a group of artisanal fishermen, has participated in clean-ups in which they found plastic bottles from China, but also debris from Central America, Mexico and neighboring Peru. He has seen hundreds of animals trapped in “ghost” fishing nets. “It is an alarming situation, but conservation is in the DNA of Galápagos,” he says.

Social networks have helped Andrade to mobilize people from all walks of life to beat plastic pollution. His group, the Insular Front of the Galápagos Marine Reserve, promotes the ban of all disposable plastics in the archipelago and is encouraging restaurants to stop using plastic straws. “There are already some restaurants using metal straws!” he says proudly.

“We still have time to protect the archipelago from marine litter, maintain a healthy biodiversity and preserve the Galápagos as a laboratory of evolution,” says Carrión, the National Park director. “But the islands still have a long way to go to better manage our waste.”

Ecuador has joined the Clean Seas campaign, the UN’s most ambitious effort to tackle marine litter. The campaign promotes partnerships between governments, the private sector and citizens to clean up the world’s oceans. “Beat Plastic Pollution” is also the theme of World Environment Day 2018.

Learn more about UN Environment’s work on oceans and seas: