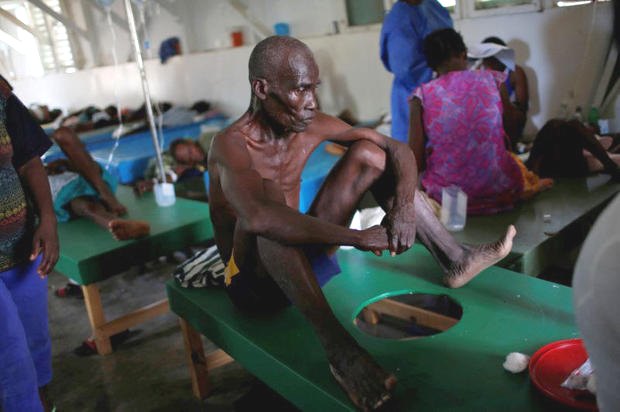 At a cramped police station serving as a makeshift clinic, Darline Derosier fastened IV drips to jail cell bars, wiped the brows of cholera patients and tended to the wounds of those injured when Hurricane Matthew slammed into Haiti’s southwestern peninsula.

She was the only health worker helping about 40 patients Monday inside the station bereft of police as she waited for help to arrive in the hard-hit town of Marfranc nearly a week after the Category 4 storm struck Oct. 4.

Among the patients was an elderly woman lying unconscious on a jail cell floor with a leg bandaged in an old rag and a man with gashes around his neck, his eyes fluttering.

“People will die soon if we don’t get some aid,” an overwhelmed Derosier told The Associated Press.

The town is a 45-minute drive southwest from the coastal city of Jeremie, where food, medicine and fresh water are finally arriving but still slow to reach increasingly desperate communities. 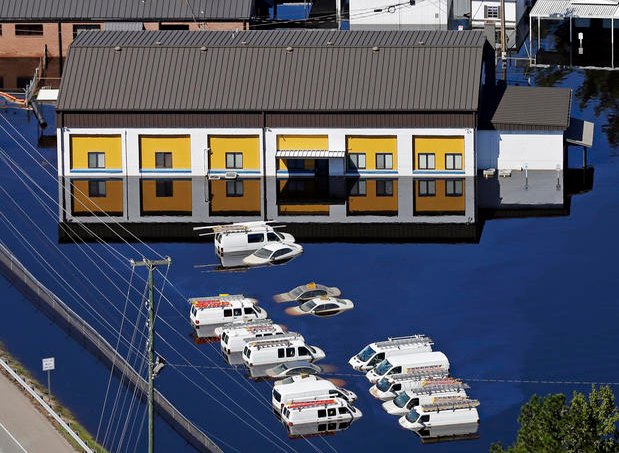 Vehicles at a business are surrounded by floodwaters from Hurricane Matthew in Lumberton, North Carolina. Image: Chuck Burton/AP

“We haven’t received anything from Jeremie,” Derosier said, adding that she has made several calls requesting help and medical supplies.

CBS News correspondent Vladimir Duthiers reports officials say Jeremie is among the worst-hit towns, with an estimated 80 percent of buildings there damaged or destroyed during the storm.

The U.N. humanitarian agency in Geneva made an emergency appeal Monday for nearly $120 million in aid, saying about 750,000 people in southwest Haiti alone will need “life-saving assistance and protection” in the next three months. U.N. officials said earlier that at least 1.4 million people across the region need assistance and that 2.1 million overall have been affected by the hurricane. Some 175,000 people remain in shelters.

Electricity was still out, water and food were scarce, and officials said young men in villages along the road between the hard-hit cities of Les Cayes and Jeremie were building blockades of rocks and broken branches to halt relief convoys. 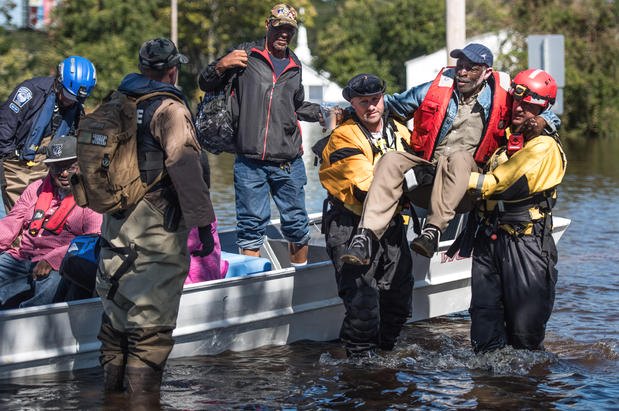 A convoy of food, water and medicine was attacked by gunmen in a remote valley where there had been a mudslide, said Frednel Kedler, coordinator for the Civil Protection Agency in the Grand-Anse Department, which includes Jeremie. Authorities will try to reach marooned and desperate communities west of Jeremie later Monday, he said.

The National Civil Protection headquarters in Port-au-Prince raised the official nationwide death toll to 372, which included at least 198 deaths in Grand-Anse. But local officials have said the toll in Grand-Anse alone tops 500.

The Pan American Health Organization and others warned of a surge in cholera cases because of the widespread flooding caused by Matthew. Haiti’s cholera outbreak has killed roughly 10,000 people and sickened more than 800,000 since 2010, when it was introduced into the country’s biggest river from a U.N. base where Nepalese peacekeepers were deployed.

Roosevelt Zamos of the Civil Protection Agency told AP there were 40 cases of cholera in Jeremie alone. He said eight people have died of cholera in Grand-Anse since the storm. 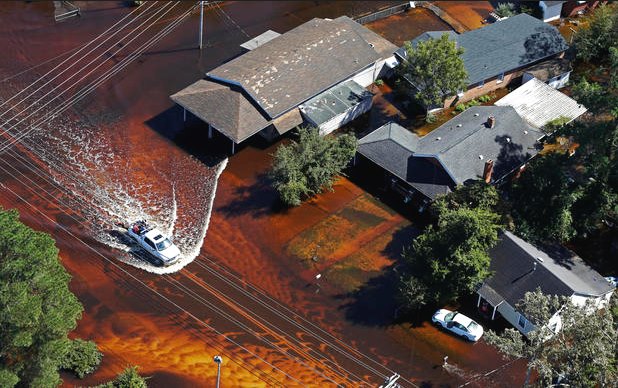 It can take from 12 hours to five days for cholera symptoms to appear after ingesting contaminated food or water, according to the World Health Organization.

The open-air cholera treatment center at Jeremie’s main hospital had no running water Monday, and at least a dozen of the new patients were under age 10.

Etienne Chimene tried her best to soothe her 13-month-old son, Cenelson, who was lying in a wooden bed with a hole cut in it and a bucket underneath.

“I feel like my baby is getting worse,” she said as she stroked his head and he whimpered.

The center was overcrowded, and patients who were improving were forced outside. Among them was 21-year-old Nedrine Cabane, who sat on the ground with her father. He had brought her a pot of plantain soup that she ate gratefully – her first meal in three days. 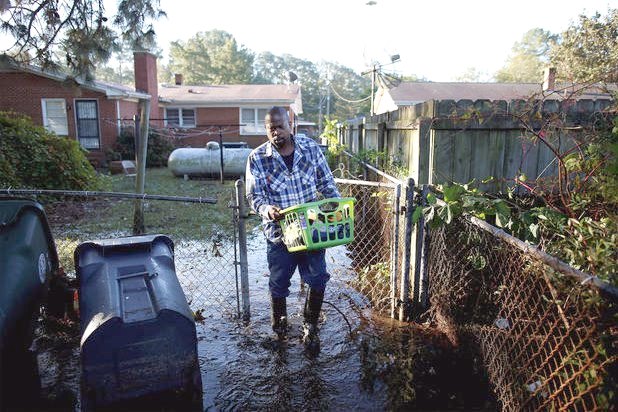 “The fact that there is so much dirty water around makes me think that more people are going to get sick,” she said.

Dr. Thiery Francois, lead doctor for the Ministry of Health at the cholera center, said he didn’t know how many new cases had been caused by the storm nationwide.

“Certainly there are cases we don’t know anything about,” he said, referring to still-isolated areas.

People in the seaside communities of Port Salut and Les Cayes said little to no aid had reached them by Sunday. Besides food and water, they need clothing and especially shoes, because many have cut their feet or stepped on old nails in the scattered debris.

“I lost everything. See what I have on? Somebody gave it to me,” said Merlaine Chere in Port Salut. She showed off a wound from stepping on a nail and said she had been denied treatment at a hospital because it demanded a $150 payment she didn’t have. 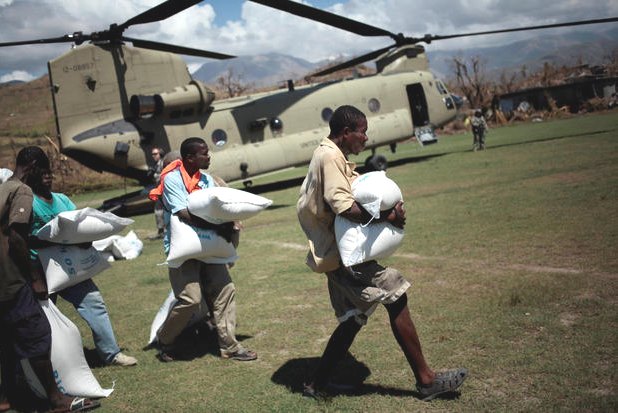 Fisherman Dominique Pomper said the mayor came to distribute some rice, but that was it. Among other things, he said, people need water. The surging ocean contaminated their wells, making water undrinkable.

Pomper said he tried to stay at home with his family during the storm, but they eventually fled as the water rushed into their house. The 61-year-old said it was the worst night of his life, but that he would never leave his seaside village.

“We are fishermen here. Our job is the water. We can’t run away from the water,” he said.

The airstrip in Jeremie is unable to accommodate large cargo planes, so relief was being ferried to the devastated city by helicopter. Three of nine U.S. helicopters had arrived in Jeremie by Sunday, bringing rice and cooking oil, among other things.

“I lost everything I own in this hurricane. I just came here to get some help,” said subsistence farmer Markus Bagard, one of about 200 Haitians standing outside the airstrip watching the helicopters be unloaded.