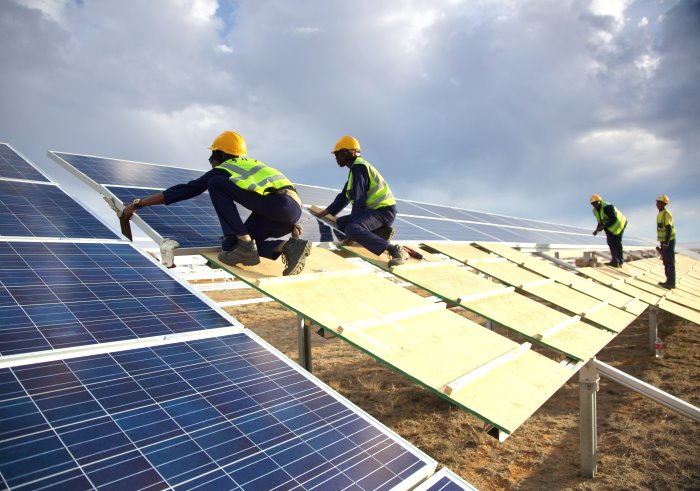 One of the first solar power projects in South Africa, Droogfontein‘s plant generates sufficient energy each year to meet the needs of 19 000 households.

During 2014 renewable energy from SA’s first wind and solar photovoltaic (PV) projects brought R0.8-billion more financial benefits to the country than what they cost.

This according to an independent study by the Council for Scientific and Industrial Research (CSIR).

The benefits earned were two-fold. The first, derived from diesel and coal fuel cost savings, is pinned at R3.7-billion. This is because 2.2 TWh (terawatt-hours) of wind and solar energy replaced the electricity that would have otherwise been generated from diesel and coal (1.07 TWh from diesel-fired open-cycled gas turbines and 1.12 TWh from coal power stations).

The second benefit of R1.6-billion is a saving to the economy derived from almost 120 hours of so-called “unserved energy” that were avoided thanks to the contribution of the wind and solar projects. During these hours the supply situation was so tight that some customers’ energy supply would have had to be curtailed (“unserved”) if it had not been for the renewables.

Benefits of R5.3-billion in total

Dr Tobias Bischof-Niemz, who heads up the CSIR’s Energy Centre, explains: “The study was based on actual hourly production data for the different supply categories of the South African power system (e.g. coal, diesel, wind, PV). We’ve developed a methodology at the CSIR Energy Centre to determine whether at any given hour of the year renewables have replaced coal or diesel generators, or whether they have even prevented so-called unserved energy.”

This CSIR methodology was fed with cost assumptions from publicly available sources, such as Eskom’s interim financial results from 2014 for coal and diesel costs, the Department of Energy’s publications on the average tariffs of the first renewables projects, and the Integrated Resource Plan on the cost of unserved energy.

Because the study was an outside-in analysis of the system operations, conservative assumptions for the system effects and for the costs of coal were chosen. Given this, the actual cost savings that renewable energy sources brought during 2014 are presumably higher than shown by the study.

“Our study shows that in 2014, renewable energy provided a net financial benefit to the country. Without the first solar and wind projects, we would have spent significant additional amounts on diesel, and energy would have had to be unserved during approximately 120 additional hours,” Bischof-Niemz says.

“What is more, the cost per kilowatt hour of renewable energy for new projects is now well below R1 for solar PV and between 60c and 80c for wind projects. That will keep the net financial benefits of renewables positive, even in a future with a less constrained power system.”

The CSIR intends to continue to monitor the fuel-saving and security-of-supply benefits of renewable energy.

The agency undertakes directed and multidisciplinary research, technological innovation as well as industrial and scientific development to improve quality of life. In July 2014, the CSIR established an integrated energy research centre, which focuses on the key energy challenges of the country and the region and consolidates the energy-related research taking place across the CSIR.