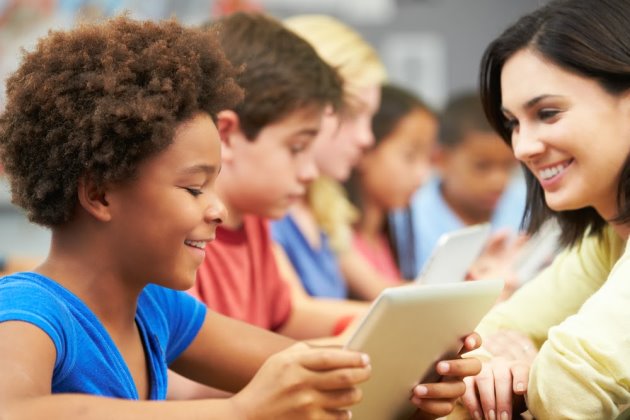 This new school year, the learners and teachers at Umhloti Primary School in Verulam, KwaZulu Natal will join the global tech savvy community, learning to adapt to the modern tools used in everyday lives, thanks to their new Solar Powered PC Lab.

giveITback, in partnership with Poynting and African Union Communications, donated the first of its Solar Powered Computer Labs to Umhloti Primary School to address the need for learners to better understand information and communication technology (ICT).

During the launch of the paperless classrooms around Gauteng on Wednesday, 14 January 2015, Deputy President Cyril Ramaphosa highlighted that one of the factors constraining economic growth in South Africa is the relative shortage of e-skills. He then called on the private sector to support the initiative to make ICT education a reality in schools and ultimately replicate it in other provinces.

Sharing Ramaphosa’s conviction, Badsha Adam, Umhloti Primary School principal says, “By exposing our learners to computers, they will learn how to actively seek information, which we believe will significantly contribute to their development and eventual competitiveness in the job market.”

After a lengthy and rigorous testing period, Africa’s first commercially available Solar Powered Container Lab is ready to take rural schools into the digital age. These labs, holding 21 computers, are specifically developed for non-affluent schools, addressing lack of electrical infrastructure, lack of building infrastructure and lack of access to technology.

Information is power to the youth

Over and above the benefits of using clean energy and driving rural development, the Solar Powered Container Lab allows sponsors to assist any community both locally and internationally, regardless of existing infrastructure restrictions.

“This innovation holds great potential for bringing technology to schools in areas where help is needed most, to give their learners the best chance at a bright future,” says Jonathan Michael, founder of giveITback. “Access to ICT is an investment in our country’s future and is one of the most valuable gifts the next generation can receive.”

Since 2011, giveITback has successfully installed 21 fully functioning computer labs in schools throughout the country, positively impacting over 20 000 underprivileged children, but Umhloti Primary School is the first to receive a computer lab that runs on renewable energy.

With the introduction of their first Solar Powered Container Lab, giveITback is inviting corporate South Africa to invest in the future workforce of South Africa.

“Despite the state of the art technology used in the Solar PC Lab, it is currently the most economical solution available, retailing at only R450 000,” Michael explains. “Its all-inclusive design and affordability will allow our clients the opportunity to make a real difference with their corporate social investment (CSI) spend.”

As electricity in South Africa becomes increasingly expensive, even schools with access to the power grid could benefit enormously from these energy-saving technologies.