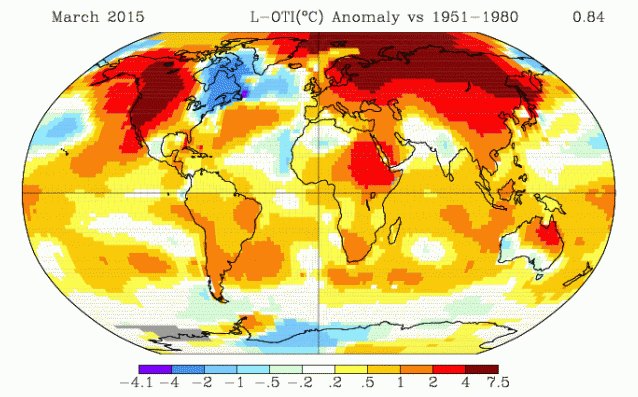 With El Nino firing off in the Pacific and polar amplification pushing to ever-greater extremes in the Arctic, 2015 is following hot on the heels of 2014’s record warmth. A situation that is increasing the likelihood that the 2014-2015 period will feature back-to-back record breaking years.

A very warm month in a trio of near record warm months that, when combined, exceeded the temperature departure for any January-through-March period in the global climate measure. The average for 2015’s first three months totaled +0.79 C above 20th Century climates, making it the hottest start for any year since 1880. The first three months of 2002 now come in as second hottest at +0.77 C — with 2007 and 2010 tied for the third hottest such period at +0.75 C.

These values are +0.99 C above 1880s averages and about +1.14 C above averages for the cool period at the start of the 20th Century. Ongoing and growing temperature departures representing a very rapid rate of temperature rise — one more than ten times faster than the warming that put an end to the last ice age.

NASA’s geographic temperature anomalies map (top image) gives us a sense of the distribution of this extreme and record global heat.

Highest temperature departures occurred in an expansive zone from Northeastern Europe, through most of Siberia, and stretching on up into the high Arctic. This hot zone occurred in conjunction with persistent south to north air flows over the European and Asian Continents. These meridional patterns delivered substantial record heat to the Arctic, contributing to record low sea ice extent measures by end of month. This region also showed monthly anomalies in an extraordinary range of +4 to +7.5 degrees Celsius above average.

A second hot zone along the US and Canadian West Coast occurred in conjunction with a Ridiculously Resilient Ridge pattern and related south to north air flows. This region showed temperature departures in a range higher than 4 degrees Celsius above average and included extreme, 1,200 year, drought conditions for California combined with record heat and wildfires for this broader region.

Throughout the geographic temperature map provided by NASA, we find that most global regions experienced much warmer than normal temperatures — with the equatorial, tropical, and Northern Hemisphere zones showing the greatest departures.

Significant cool departures are either related to an apparent and ocean health threatening AMOC slow-down in the North Atlantic south of Greenland (Rahmstorf), include the Northeastern US and Canada, or involve the broader heat sink in the Southern Ocean. It is a distribution of broad, rapid warming and isolated localized cooling consistent with what global climate models have been predicting for human-forced climate change for many decades now.

These models predicted that the Northern Hemisphere Polar region would warm fastest and first, that the Southern Ocean would draw a greater portion of atmospheric heat into the ocean system, and that land ice melt near Greenland and West Antarctica would generate cold, fresh water flows into the nearby ocean zones and set off localized cooling. Atmospheric cooling, in this case, that would occur in isolation and in the context of a broader and rapidly warming global climate system together with a dangerous warming of the land ice sheets.

The NASA zonal anomalies map is also consistent with an extraordinarily strong Northern Hemisphere polar amplification for March. One that jibes with predicted polar warming due to the human heat forcing. Here we find an extreme heat departure in the region of 85-90 North Latitude of +3.2 C for the month. Much of the Northern Hemisphere shows strong heat amplification with values above +1 C and rising in all the Latitudinal zones above 40 North.

All other zonal regions except the noted heat sink in the Southern Ocean show positive, though less extreme, temperature departures.

Overall, these are extraordinary and disturbing heat maps. Observations that validate many of the previous warming predictions. Maps that include the eerie tell-tale of an early Ocean Circulation slow-down in the North Atlantic. A set of observations that point toward a number of rather extreme weather and climate conditions for this year and for the years to follow.