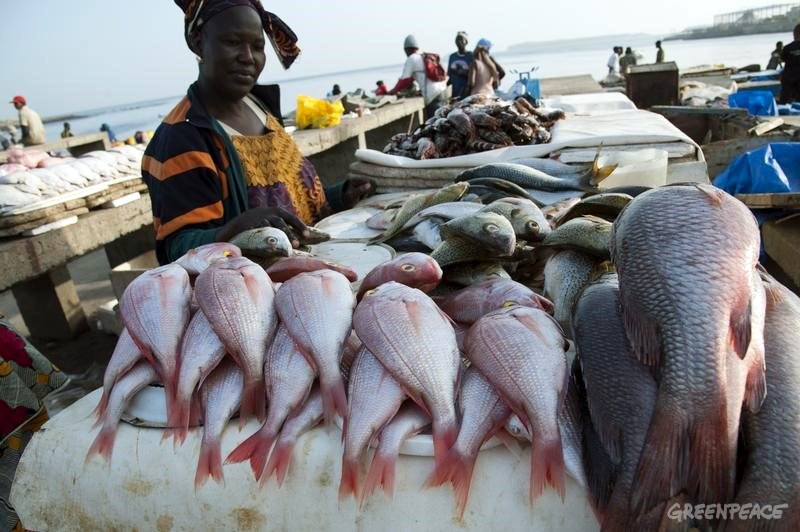 We humans love drawing lines on maps. Over many centuries borders have been created by our peoples or have been imposed on them, separating our languages, our cultures, our traditions. But fish knows no borders, they migrate from the waters of one country to another. In West Africa, millions of people critically depend on fish either because they catch and trade them or because fish is their most accessible source of animal proteins and one of the most efficient ways to meet their nutritional needs.

Many West African fishermen exploit these so-called shared stocks. The multi-national nature of these fisheries has great consequences on management policies, because depending on where fish are, in which country’s waters, different rules may apply to those catching them. If resources are over-exploited – as it is the case for many fish stocks in our region – it is not enough with one country taking measures to improve the situation. Action needs to be taken in a concerted way by all countries exploiting any such fisheries. This is why the United Nations Law of the Sea, which some call the Constitution of the Oceans, says that Governments must cooperate in order to ensure the conservation of such fish populations.

Are governments cooperating according tot he UN Law of the Sea?

Now, are our Governments cooperating accordingly? The answer is very little if at all, and not effectively. The only region-wide fisheries organization that exists in West Africa is called CECAF (the Fishery Committee for the Eastern and Central Atlantic), and 21 of its 34 members met last week in Dakar. CECAF is an advisory body, so it doesn’t have the power to adopt  binding fisheries management measures; it meets sporadically and it suffers from a continuous lack of funding to support, among others, the important work of fisheries scientists across the region. Fish monger wears a t-shirt reading in French “stop overfishing” at Soumbedioune fish market. Greenpeace is campaigning in West Africa for the establishment of a sustainable, low impact fisheries policy that takes into account the needs and interests of small-scale fishermen and the local communities that depend on healthy oceans.

Four years had passed since the previous CECAF meeting had taken place in 2012. Enough time, we thought, so that countries would attend prepared to present concrete proposals tailored to strengthen the work of the organization and improve the conservation of fish stocks in West Africa. During the meeting we heard a lot about the numerous challenges that CECAF faces: poor status of fish stocks; insufficient human resources and funding of the organization’s work; limited attendance of member countries to its meetings; little to no implementation of CECAF’s recommendations by its members. All well known and none of it new. But in response, we heard very little about how to solve these problems.

Greenpeace Africa attended this CECAF meeting with the main objective of highlighting the critical importance of cooperation: there is no future for many fish stocks in the region – and hence for West African fisherpeople –  unless strong measures are adopted and implemented at regional level. We highlighted the importance of commitment: CECAF won’t work unless its members live to the commitments they make. And we denounced the lack of action: CECAF has been discussing how to improve its work for almost 20 years and yet is not showing signs of having found a way to function effectively.

One particular issue of concern emerging from the meeting is the indication that the amount of fish in the region going to fishmeal factories – to feed fish usually farmed in far away countries rather than people in West Africa – is increasing. This is a trend which could, potentially impact on access to fish by millions of West Africans. On the positive side it was decided that the much needed scientific work of CECAF will be scaled up in the coming months, hopefully helping update existing knowledge about fisheries and fish stocks in the region. Better knowledge is crucial to improve the sustainable management of fisheries. But it won’t change the fundamental underlying problem which is that we urgently need efficient regional management structures to reflect the fact that, as we said, fish knows no borders.