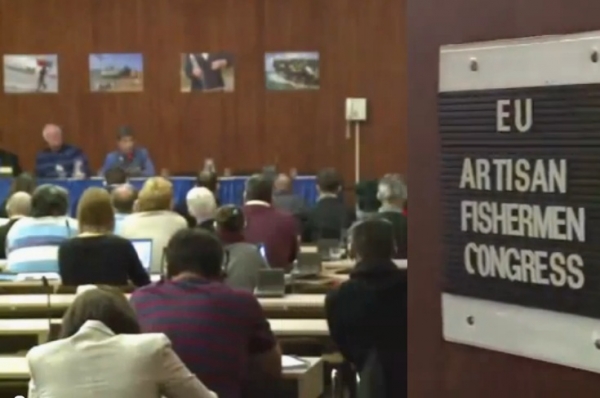 Small-scale fishermen from across Europe are joining forces to put sustainable, artisanal and low-impact fishing at the heart of the on-going reform of European Union (EU) Common Fisheries Policy (CFP).

Delegates from across the continent, representing dozens of local and regional associations of artisanal fishermen and thousands of fishing sector jobs, gathered at the Brussels European Artisanal Fishermen’s Congress. They adopted a joint declaration promoting a new vision for European fishing. The declaration will this week be formally handed over to the European Commission, the European Parliament and the Council Presidency.

Small-scale fishing vessels account for 80 percent of Europe’s fishing sector, but for decades the vast majority of fishing quotas and EU subsidies have favoured industrial fishing operations, which have in many cases accelerated the depletion of fish stocks and environmental damage to our seas. Over 60 percent of European fish stocks are overexploited. The complacency of national governments, the European Union and European organisations that are meant to represent the interests of the sector in Brussels now threaten to irrevocably destroy the last chance for Europe to achieve sustainable fishing.

The artisanal sector and the seas that it depends on have suffered greatly from years of neglect and the once-in-a-decade reform of the EU’s Common Fisheries Policy is a unique opportunity to:

“We want to leave a legacy of healthy seas and oceans in a world where there is less, but better fishing. So far, the reform of EU fishing rules is merely tinkering at the edges. Today we are sending a message to our ministers and representatives in the European Parliament that they can no longer ignore the laws of nature, the state of fish stocks and the role of small-scale fisheries. Only once this becomes a reality, can the EU bring the reform process back on track,” said Anne-Marie Vergez, a hake fisherwoman from France.

“Fishing pressure has grown all around us, particularly from big industrial ships. The new fishing rules must get a handle on this, bringing down the number of fishing vessels where there are too many, while giving preferential access to low-impact fishermen,” said Luis Rodriguez, an artisanal fisherman in Galicia, Spain.

“The sea is not an industry. She has her own rules. If we continue to take more fish out of the sea than is sustainable, we will bankrupt her and our sector. Small-scale fishing brings more economic value to local communities than destructive fishing. In times of crisis, national governments and Europe should encourage responsible fishing instead of wasting money on those that accumulate private fortunes by overfishing,” said Dimitris Zannes, a small-scale fisherman in the Southern Aegean in Greece.

“Fishing is a way of life that small-scale fishermen have practiced for generation after generation and that is threatened as never before. While not being caused by artisanal fishermen, overfishing has had a disproportionate effect on their ability to survive. If any boats need to stop fishing, it shouldn’t be the smaller, low-impact boats that provide fish and support directly to local communities,” said Jerry Percy, a small scale fisherman in the UK.