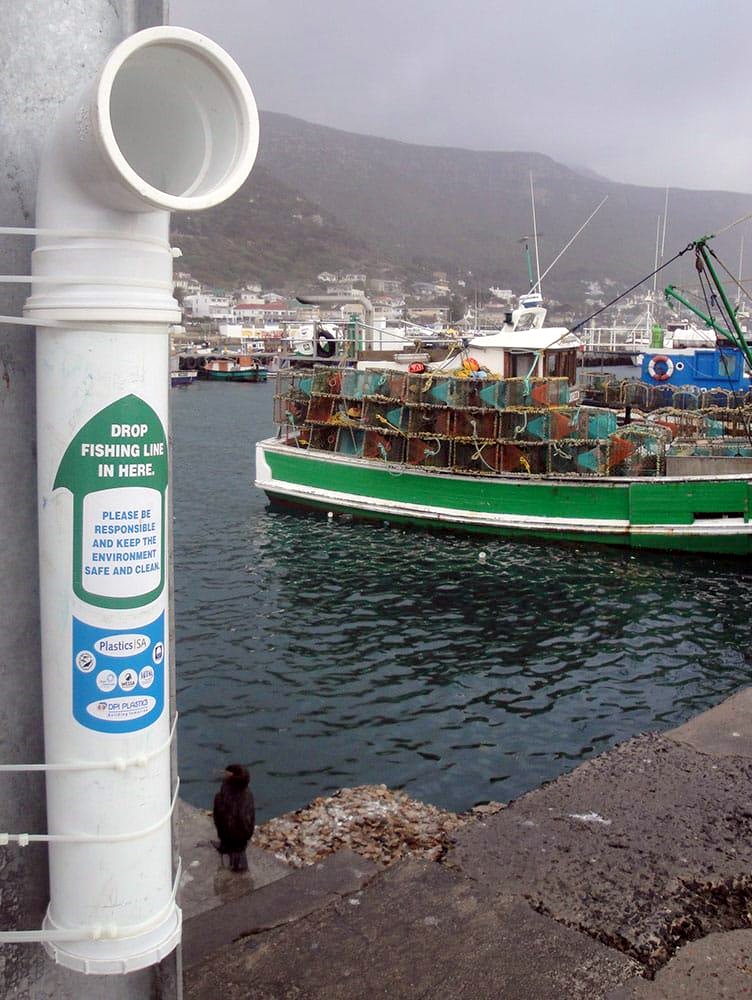 DPI Plastics has been involved with the initiative for the past four years, supplying the pipes and fittings for the manufacture of the specially-designed fishing line repositories, explains Marketing Manager Martine Goodchild. The initiative is one of the sustainability programmes organised by Plastics SA, of which DPI Plastics is a member.

“We now have fishing line bins along the whole Kwazulu-Natal coastline, managed by local authorities, Ezumvelo KZN Wildlife, and private organisations. Bins are now at all Blue Flag beaches, where fishing line is collected, even though fishing is prohibited in these areas.

Bins have also been placed from Witsand to the De Hoop Nature Reserve, and from Port Alfred to Kenton-on-Sea, both popular fishing areas,” Plastics SA Sustainability Manager John Kieser explains. Commenting on the future expansion of the initiative, Kieser reveals that Plastics SA is looking into filling those gaps between areas already covered, and possibly areas on the Namibia coastline, frequented often by South Africans, as well as popular fishing sites on the Skeleton Coast.

Such has been the success of the initiative, that it has spread to include diverse areas such as Nature’s Valley, a holiday resort and small village on the Garden Route along the Southern Cape coast. Here underwater clean-up operations have targeted monofilament line on reefs, where it gets caught on rock and other obstructions underwater when people fish.

“There have even been requests for bins for some inland areas,” Kieser notes.

The plastics industry internationally is concerned about the large inflow of plastics into the sea.  Monofilament line is one of the items within this waste stream, with the highest probability of entanglement for all life at sea and on the coast. It has been well documented how cetacea and other marine mammals, together with fish, sea birds, and coastal terrestrial animals, have either been injured or killed by being entangled in fishing line.

Apart from its ongoing commitment to the Fishing Line Bin Recovery Programme, DPI Plastics was a key supporter of the establishment of the African Marine Waste (AMW) network in 2016. It is a sponsor of the inaugural AMW Conference 2017 from 9 to 13 July at the beautiful Algoa Bay Hope Spot near Port Elizabeth.

The AMW network aims to facilitate a guide to best practice by developing an effective marine-waste strategy for Africa. As waste knows no boundaries, the conference aims to draw together participants from all African coastal and island states to develop shared strategies to solve problems within countries and across borders.

The AMW Conference 2017 will provide a global interdisciplinary platform for stakeholders to present and discuss the most recent innovations, trends, and concerns, as well as practical challenges encountered and solutions adopted in the field of debris and marine waste.

Goodchild urges other manufacturers and suppliers to support Plastics SA in its sustainability initiatives. “The success of the Fishing Line Bin Recovery Programme, in particular, is clearly visible in the decrease of line wastage in angling hotspots where our bins have been prominently located,” she concludes.