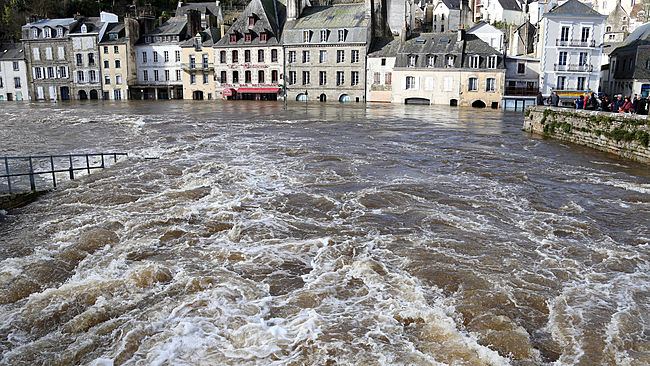 Areas in the United Kingdom and western Europe will continue to have persistent rain this week as flooding concerns rise.

The active weather pattern has already brought a stream of storms and heavy rain for the past weeks which have left some parts of the United Kingdom under water.

More floods on the way

A storm brought rain on Tuesday and two more storms will result in additional rain before the week comes to an end, leading to the concern for additional flooding.

The next storm system will approach Ireland and England on Wednesday morning. In addition to periods of steady to heavy rain, this storm will bring the threat for widespread damaging winds.

The strongest winds will be found across southern Ireland, Wales and England where gusts of 80-95 kph (50-60 mph) are expected. Isolated gusts of 115-130 kph (70-80 mph) will occur along and near exposed coastal areas.

Although rainfall will generally average less than 25 mm (1 inch) across Ireland and the United Kingdom, any rainfall will continue the threat for flooding as river levels remain dangerously high.

The good news is there will be a brief break across most of western Europe to start the weekend with some sunshine and showers.

However, another storm is expected to stretch over the United Kingdom and to the Mediterranean Sea for early next week.