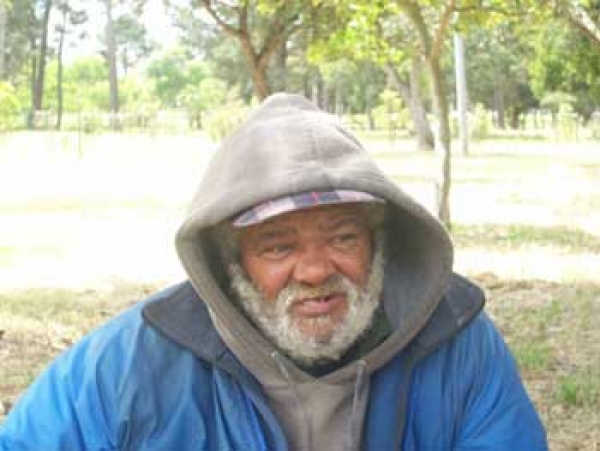 Peter is 60, lying under an oak tree with his head on a small bag containing his worldly possessions. I’ve greeted him many times when out on a run; today I stop and ask him his story. ‘I grew up in the Karoo and went to a Catholic school with German nuns. When I came to Cape Town I worked in a candle factory in Observatory until it closed down in 1994. I couldn’t get another job and have been on the street since then.’

‘Staff at the nearby sports fields, the police station, and here [a public tree park] have known me for years and let me use their ablution facilities. I get water there and use the toilets, I don’t leave a mess where I go,’ he explained.

How does he keep warm in winter and cook his food? What fuel does he use, does he make a fire? Peter shakes his head. According to him he has had 3 small gas cookers stolen over the years, ironically by patrolling security guards. Now he buys tinned and take-away foods, and keeps warm solely by wearing more clothes.

I ask if he drinks or smokes.

‘I drink like Chris Barnard – only an occasional glass!’ he quips, ‘I don’t want to go into oblivion.’

The story fits; I have never seen Peter looking under the weather. Does he like Nature, does he experience her as a friend or an enemy?

‘Nature has kept me healthy all these years. At the old age home everyone is sick, but I haven’t had a day of ill health. I think it’s because I’m out in the fresh air all the time.’

The hand of God

At night Peter sleeps in a security hut near an official state residence; he says the hut is a relic from the previous regime and is unused.

‘When the Xhosa policemen come to shoo me away I tell them I voted for Mandela and they leave me in peace,’ he cackles into his beard.

Does he believe in God? With a wide sweep of his hand that takes in land and sky he says, ‘More and more I do, as I watch the seasons change and feel Nature’s different vibration each day. I also read in the paper about how the weather is shifting around the world and believe it is the hand of God.’

A family living nearby gives him newspapers each Monday, and he can often be seen reading in the park. He is quite well informed and has a simple wisdom and benevolence, like a character in a folk tale. I ask Peter what he does with his garbage and his eyebrows rise in surprise.

‘Why I put it in a rubbish bin of course!’ he says. He gets a small pension from the state and asks people not to give him food or possessions as he has nowhere to store them and they are inevitably stolen by skollies who ‘have eyes and ears everywhere.’ He is a light traveller on the planet, and seems strangely content. [JC]