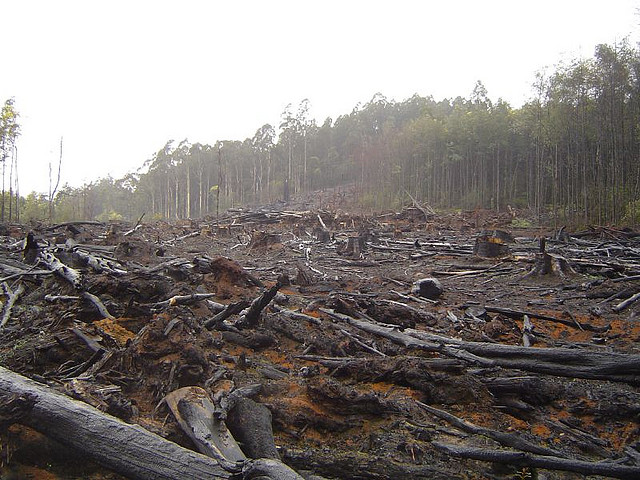 The exponential deforestation rate is a vicious 65,000 hectares a year. Image: World Resources Institute via Flickr

Ghana was once famous for her endowed timber resources. Today, she cannot boast much about the abundance of this resource. The little remaining is struggling to thrive as it is left at the mercy of the activities of some unscrupulous persons; illegal chainsaw operators and illegal small scale miners.

Their activities have destroyed our once beautiful landscape and terrain. Water bodies are drying up by virtue of excessive over exploitation of forest resources especially for fuel wood (manifests in the savannah woodland) and many more water resources are polluted from the operations of “galamsey” (illegal miners).

I remember a poem back in my primary school days; the concluding stanza is not a joyful one.

“When the last tree dies, the last man dies”.

Apparently we have not heeded to the advice this poem sought to offer us. Our forests by the turn of the 18th century covered about 8.2 million hectares. Today, we have less than 1.2 million hectares. To add, the exponential deforestation rate is a vicious 65,000 hectares a year. A simple arithmetical calculation shows that we have 18 years remaining to lose our forest resource if Afforestation/Reforestation efforts are not intensified to rectify the situation.

Programs are executed. This deforestation issue is likely to worsen with every increase in price of crude fuel and electricity tariffs (supply of these two is already not promising) because a majority of the populace would always be inclined to utilize fuel wood/charcoal especially when they cannot meet the apparent high cost of LPG or electricity.

This development would increase demand for fuel wood, thus, a consequent increase in pressure on fragile forests. Wood fuels represent approximately 60 percent of the world’s total wood removals from forest. It is reported that wood fuels constitutes a chunk majority of the total energy consumption in Ghana (over 60%, Energy Commission 2010). Indeed, there is no doubt that wood energy demand is the major drive of deforestation and forest degradation in the country.

In some parts of Northern Ghana, women are forced to walk up to 12 kilometers a day to get a head load of fuel wood due to environmental degradation (Emelia Guo, 2007). This shows the degree of over exploitation of their immediate surrounding tree resources.

Some women gather debris from farms after harvest and collect cattle/donkey dung for use as fuel in cooking due to unavailability of wood. The nutrients from the dung or debris which would have been released back to the soil after decomposition (soil nutrient inputs) are lost, breaking the nutrient cycle. This situation is reflected in bad yields which will further impoverish the community.

A major source of natural destruction

Civil society organizations should increase participation in aiding Government to sustainably manage our natural resources. Government should in turn give its maximum cooperation to organizations most of which are seeking to employ all concerted efforts to complement Government’s attempts to salvage what is remaining of our forest estate.

Commercial production of fuel wood and charcoal is a major source of natural resource exploitation and destruction.

The establishment of community woodlots especially at areas with active commercial production of fuel wood/charcoal should be encouraged by NGO’s, CBO’s and Government to supplement the fuel wood needs of communities, thereby reducing pressure on forests for wood energy.

Government should collaborate with all stakeholders to enforce and ensure the Annual Allowable Cut (AAC) which is exceeded consistently by an estimated 1.7 million m3 annually.

Bans on exploitation need to be upheld

NGOs, CBOs and individuals must be on the look out to ensure that species with bans placed on their exploitation are not harvested. Forestry Commission makes advertisement of a list of approved stumpage fees for merchantable timber species. Though government has banned the harvest of Rosewood, it still finds its way into the list. This could be mistaken as a ‘green light’ for people to harvest the friable species. The stumpage fee for Rosewood should not make the list until the ban is lifted.

Sacred groves are home for our heritage and culture as well as a haven for biodiversity. Modernity has come to alter our attitude, perception and behavior towards them. We defy the sanctity of their sacredness by invading, exploiting and encroaching on their once protected boundaries.

Traditional authorities, CBO’s, NGO’s and Government should collaborate, deliberate and endeavor to restore the lost value of these sacred groves.

Government should give support

Government should give support, be it financial or technical assistance to individuals/organizations that are into tree plantation establishment and encourage others to go into the venture.

Government should absorb some more of the cost of LPG and electricity as the high cost is a disincentive for potential consumers. There should also be a regular supply of electricity and LPG to consumers.

Corporate bodies should be encouraged by government to support Afforestation/Reforestation programs by making financial commitments (as some do for the Black Stars) to the National Forestry Plantation Development Fund.
Commercial forest plantation is a lucrative business which the Banks and other financial institutions can take advantage of.  It promises better returns when a discounted cash flow analysis is made.

Agroforestry provides a profitable alternative to unsustainable land use practices

Though agricultural expansion is another drive to forest degradation and deforestation, we can use this activity as an opportunity to replant our lost vegetation by integrating tree components with crops on the same land management unit.

Government, CBO’s and NGO’s should push and promote the adoption of Agroforestry practices by farmers. This can be achieved by using the Youth in Agriculture module as an entry point for the promotion of Agroforestry practices in the country. Besides the provision of fodder banks, pods/fruits, fuel wood, shade, timber, micro-climatic conditions, climate change mitigation by carbon sequestration etcetera, other benefits accrue to the farmer such as improved soil fertility, reduced moisture stress, nutrient pump activity, reduced risk of total crop failure, increased yields and increased farm income amongst others. 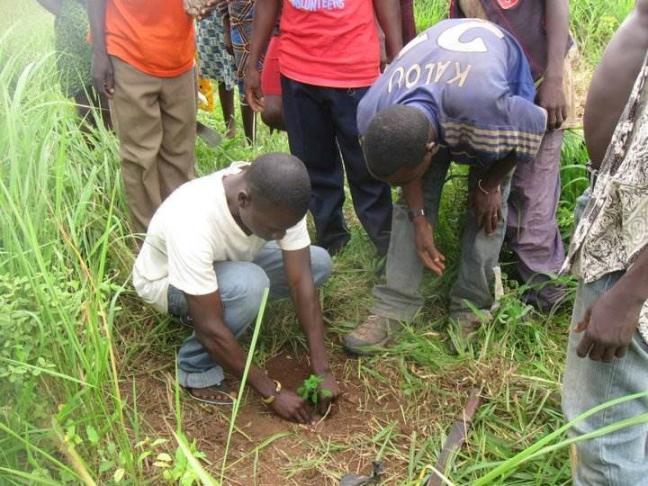 Agroforestry provides a profitable alternative to unsustainable land use practices which drive deforestation and forest degradation. The Youth in Agriculture module can be garnished and made more attractive by technically capacitating the farmers to integrate perennial woody components with crops on the same farm management unit then labeled Youth in Agroforestry.

There is the need for Government, NGO’s and CBO’s to sensitize and create awareness of individuals, communities and society on responsible exploitation and management of natural resources in a way that will not jeopardize availability for future generations. Society must eschew the attitude of perceiving natural resources as public goods which come free of charge with no restriction strings attached.

We are causing grave harm to Mother Nature, our inability to respond to calls to manage responsibly and sustainably, our natural resources, is a threat from us to the existence of our children and to our very own existence.