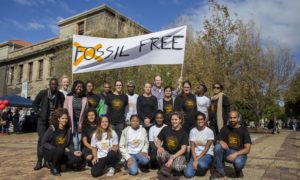 UCT students from Fossil Free UCT collect signatures for a petition calling for the University to divest from fossil fuels and become the first university in South Africa to adopt this resolution. Image: Jennifer Bruce / 350Africa

It is now six years since Fossil Free SA first called on the University of Cape Town (UCT) to phase out all investments in climate-destroying fossil fuels such as coal, oil and gas. In those six years, the global fossil fuel divestment movement has grown from a handful of institutions to well over a thousand, including New York, Paris, London, our own city of Cape Town; a whole country, Ireland; and half of all British universities. Most have continued to get the same or better returns on their investments.

The university has made some progress. It appointed an ethical investment task team, and then a responsible investment panel which is now meeting just four times a year. Our new Vice Chancellor has appointed a campus sustainability officer. This is good. But it is nodding to trends, it is not leading, not yet.

Over these six years, the concentration of carbon dioxide in the atmosphere has increased from 400 parts per million to 415 parts per million, not just increasing, but even now, still accelerating away from the pre-industrial level of 280 parts per million. This is the highest level in at least 3.5 million years. Our human species has never lived with CO2 levels even close to this high.

But even as UCT researchers track this advancing cataclysm, UCT has not divested from fossil fuels.

It is four years since the world’s nations agreed in Paris to limit global warming, fuelled principally by burning fossil fuels, to 1.5 degrees, but UCT has not divested from fossil fuels.

South Africa is crippled by drought, with our fellow citizens experiencing terrible hardships, and Cape Town nearly ran out of water last year, but UCT has not yet divested from fossil fuels. 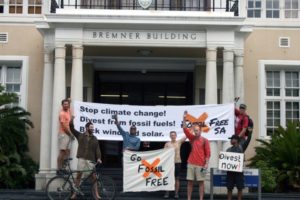 The Sasol share price has halved in the past six years, but UCT has not divested from fossil fuels.

It is two years since Convocation first voted overwhelmingly in favour of the university divesting over the next five years, but UCT has still not even published its current investments, as Convocation then requested.

In September, 7.6 million people around the world, led by children, marched for the climate – but UCT has not divested.

It is five years, five long years, since a Nobel Peace laureate, Archbishop Emeritus Desmond Tutu, called on UCT to divest from fossil fuels – yet UCT has not yet listened. Will the Archbishop pass away with his call to a supposedly progressive institution still unheard?

Our national leaders, our politicians, claim to be worried about climate breakdown, but are still egging on our coal and gas industries. They either do not understand or do not care that a safe climate is being destroyed by these industries. One might argue that this is to be expected when the leading university in Africa, the continent most vulnerable to climate catastrophe, has yet to demonstrate a decisive stance on the issue. 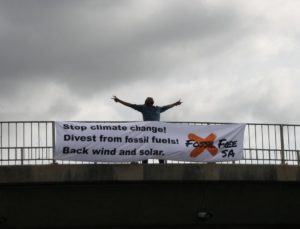 Dozens of institutions in countries less affected by climate breakdown than South Africa are declaring climate emergencies, but in a country warming at twice the pace of the global average, it seems there is no climate emergency yet at UCT.

Fossil Free SA calls on the Vice Chancellor, Council, the University Panel on Responsible Investment, and the Joint Investment Committee to commit at last to real leadership on climate change, that is: