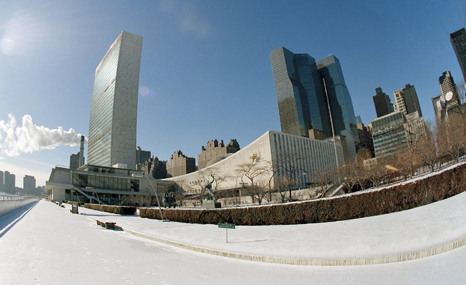 The world’s 48 leading fossil fuel companies will be asked to run a ‘climate stress test’ at a summit hosted at UN Headquarters in New York on Wednesday.

Fund managers and investors attending the meeting want oil and gas majors to assess how compatible their assets are with global efforts to avoid dangerous levels of warming.

US low carbon business group CERES, which runs a network of investors worth $12 trillion, is organising this week’s event. Its chief Mindy Lubber told RTCC the financial risks associated with a carbon ‘bubble’ of fossil fuel reserves that cannot be burnt was starting to concern experts, prompting the move to call for more transparency from the fossil fuel industry.

The carbon bubble idea was launched in April 2013 to highlight the $674 billion of investments into oil, gas and coal that must stay in the ground if the world is to avoid dangerous levels of warming.

With countries set to sign a UN global greenhouse gas emission reduction deal next year, Lubber believes the stress test they are calling for will demonstrate why oil majors need to diversify.

“We’re hoping that not only shows the risk but moves their new and future investments into something less fossil fuel orientated,” she said.

“Right now there is half a trillion dollars a year being spent to come up with new fossil fuels – digging, mining – that may very well be stranded on top of the already stranded assets.”

A critical year for climate negotiations

CERES has organised a low carbon investor’s conference at the UN’s HQ for the past six years, but this week’s meeting has added significance given the political importance of 2014 to the climate negotiations.

In March national delegations are set to start the final set of negotiations on an international climate agreement. UN Secretary General Ban Ki-moon says he wants to see evidence of progress at a high-level leaders meeting he is hosting in September, ahead of the year’s main UN climate meeting in Lima this December.

On Wednesday CERES will launch their latest Clean Trillion Report, based on data from the International Energy Agency, that says $36 trillion needs to be found by 2050 for low carbon infrastructure projects.

Despite impressive growth in the wind and solar industries in the past few years, green investment flows are mixed. Bloomberg New Energy Finance say $281bn was invested in 2012, considerably lower than the trillions analysts like Lord Stern say are required.

Huge doubts remain over the potential of the UN-backed Green Climate Fund, which becomes operational this year, but Lubber cites the growth in the green bonds sector as evidence banks are starting to see the potential of low carbon infrastructure projects.

Last year $10bn of green bonds were issued, including $500m from Bank of America and a similar amount from HSBC.

Other big names investing in these bonds include Zurich Insurance, JP Morgan and Daiwa Securities. It’s proof, Lubber says, that the ‘green’ numbers are starting to stack up for the financial markets.

Further progress was announced on Monday, with news that a set of principles for the release of Green Bonds had been agreed by environmental groups, issuers and investors.

Lubber said: “These aren’t social investment firms. We’re not making the case that banks or asset managers should be doing this because it’s morally right. It has to be a financial issue.”

She added:  “We need to move the climate debate from a treehugger issue to an on-balance sheet financial risk, and we need to act based on the economic risks and opportunities.”