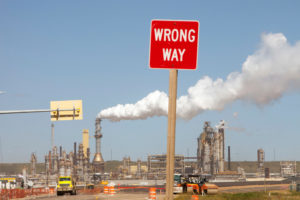 The Syncrude upgrader plant. The tar sands are the largest industrial project on the planet, and the world’s most environmentally destructive. The synthetic oil produced from them is 3 times more carbon intensive than conventional oil supplies, a disaster for the climate. They are responsible for the second fastest rate of deforestation on the planet. Second only to the amazon Rainforest. They produce millions of litres of highly polluted water every day which leaches out into the Athabasca river and has serious health impacts on First Nation peoples living downstream.

Mixed signals about the future of fossil fuels are delaying climate action. The energy transition – and our planet – depends on absolute clarity, writes WWF’s Jesse Fahnestock.

The past weeks have seen the publication of the Global Renewables Outlook from the International Renewable Energy Agency (IRENA), as well as a variety of articles discussing how historically low oil prices impact the prospects of real and sustained climate progress.

Yet much of the debate lacked clarity on a simple point: The net-zero economies needed before 2050 require us to seriously start phasing out all fossil fuels today.

IRENA’s report contains plenty of good news about the potential of renewable energy to help humanity avoid disastrous climate change impacts – much of which is common knowledge. The report is also full of credible analysis and sensible recommendations. It is also, however, a report from an intergovernmental agency, and even such an excellent piece of work is not completely free of the troubled dynamics that plague the international politics around energy and climate change.

A very small, but very telling, example: The final point in the “Key Findings” section – probably the only section most people will read – reads as follows:

“Moving forward, investment decisions could be assessed based on their compatibility with building an inclusive low-carbon economy. Anything less would hinder the transformative decarbonisation of societies.”

The final sentence of the report, 188 pages later, which many fewer people will ever read, reads as follows:

“Moving forward, therefore, every investment decision should be based on its potential to accelerate the structural shift towards inclusive, low carbon economies. Anything short of this can severely obstruct the paths to be followed for a transformative decarbonisation of societies.” (Emphasis added.)

Pointing out the difference between what governments say out loud and the whispered truths of experts on page 205 may seem petty, but the truth is this: Every major voice on climate and energy needs to be clear, crystal clear, about the future of fossil fuels. The persistence of equivocating, doubting, and hedging in the way governments and industry discuss the phase-out of fossil fuels has a major impact on the energy transition, allowing huge amounts of investment to go wrong.

Take this other data point from the Global Renewables Outlook: the authors estimate that USD 11.8 trillion in existing assets – money already invested – will have to be stranded by 2050 to achieve the Transforming Energy Scenario. Another USD 7.7 trillion will be stranded if the type of investments required by the scenario are delayed by 10 years.

That USD 19.5 trillion in wasted value is greater than the entire incremental cost of the new energy technologies deployed in the scenario (USD 19 trillion, a cost more than offset by USD 132 trillion in health and environmental benefits).

Those stranded assets are not just an enormous waste of money – they are also a huge brake on the deployment of existing solutions like electric vehicles and heat pumps, and the development of “deeper decarbonisation” options that the report describes as necessary to get to zero and net-zero emissions.

Energy transitions are not just about pricing environmental damage and letting technologies compete on the market. Even when new technologies start to realize their technical and economic potential, their deployment and development is slowed by the inertia of the old system. As long as there is uncertainty about the future role of fossil fuels (and their accompanying inertias / clientelist relations), the development and deployment of alternatives will be slower than it needs to be.

Every dollar sunk into an asset incompatible with the transition is a signal to other investors: Politicians are not serious about climate goals. There is room for fossil fuels. These companies and investors in turn lobby to protect their investments, arguing that alternatives are uncertain or unproven. Investments and research and development on those alternatives stays too low. The gulf between climate ambition and climate action persists.

A managed phase-out of fossil fuels would create a more stable outcome than investment in stranded assets would – even for those economies that are dependent on fossil fuels today. Such a phase-out could start with simple, clear policies at the country level. The recent decisions to phase out the internal combustion engine set a good example.

Now, in a time of massive oversupply of oil, more countries could follow in the footsteps of Belize, Costa Rica, France, Ireland, and New Zealand and commit to ending exploration for oil and gas. Plans for phasing out production over the long run would provide a clear complement to the phase-in of renewables, e-mobility, hydrogen and other alternatives. These kinds of measures and plans are the best way to say out loud what too many are still whispering.

The great scholar of sustainability transitions, Frank Geels, wrote about this in his paper Regime Resistance against Low-Carbon Transitions: “The resistance and resilience of [fossil] and nuclear production regimes currently negates the benefits from increasing renewables deployment … policymakers [may] have too high hopes that ‘green’ innovation will be sufficient to bring about low-carbon transitions.. [they] should therefore pay much more attention to the destabilization and decline of existing fossil fuel regimes.”

Destabilization is a scary word right now. Luckily it is probably the wrong one anyway. In many ways it is fossil fuels that are destabilizing our economies, as oil’s ever-present price volatility has found its absurdist moment.

But the energy transition can and should be a source of stability. Relief to workers and recovery for the economy from the COVID-19 crisis can and must go hand-in-hand with the reinforcement of climate goals. Recovery and stimulus investments must point clearly and unequivocally toward the energy system we say we want.