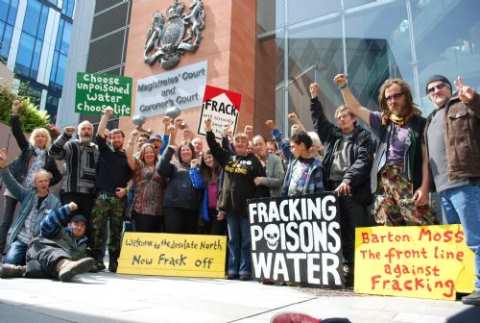 Large-scale fracking is a must for the UK economy, says a new report from the House of Lords. But it confuses opinion with fact, cherry-picks data, and six of its authors have a stake in the industry. The real solutions, writes Tony Bosworth, lie in energy efficiency and renewables.

Thursday’s report from the House of Lords Economic Affairs Committee on shale gas was a pretty depressing read for us at Friends of the Earth.

Fracking, the report declared, is an urgent national priority. The companies want to drill but regulation is holding them back. So we should streamline it and let them get on with it.

Why is fracking a national priority? According to their Lordships, it will produce cheap gas, help us tackle climate change and improve energy security. What’s not to like?

The problem is that these assertions don’t stand up to scrutiny. They are opinions, not facts. It seems like the Committee has swallowed the industry view hook, line and sinker.

Maybe that’s not surprising seeing as six members of the Committee have links with the industry.

As recently reported by Greenpeace:

Finally the committee includes one member who could be considered ‘on the other side’. Lord May sits on the government’s independent committee on climate change. And as he wisely commented:

“Even if there are not conflicts of interest, you should be avoiding the appearance of them.”

No big impact on prices expected

Will UK shale gas be cheap, as the report claims? The answer is we don’t know. Bloomberg New Energy Finance has estimated that the cost of UK shale gas extraction will be about the same as current gas prices.

What impact will this have on energy bills? According to Justice Secretary Chris Grayling, fracking could make the single biggest difference to the cost of living in the UK.

However that view isn’t shared by arch-driller Lord Browne, chair of Cuadrilla who said fracking in the UK is “not going to have a material impact” on prices. We’re part of a Europe-wide gas market, so prices are set by what’s happening at that level.

Their Lordships seem to be calling for a second dash for gas, building many more gas-fired power stations. They say that UK shale gas “could provide … an additional source of supply” if it was “combined with policy changes to encourage investment in generating capacity”.

That risks locking us into a high-carbon energy future. The Chief Executive of the Committee on Climate Change has said that such a ‘dash for gas’ should be “Plan Z” as it was “completely incompatible” with our climate change targets.”

We already have more fossil fuels than we can afford to burn if we want to avoid catastrophic climate change. So why look for more?

But gas is lower carbon than coal, the industry and its supporters claim, so we should switch from coal to gas. If this is true – and the academic jury is still out – it’s not an answer.

Without a global climate deal, how do we guarantee shale gas will be used instead of coal, rather than as well as? And doctors don’t tell smokers with lung cancer to switch to low-tar cigarettes – they tell them to give up smoking.

Will UK shale gas improve energy security? Not when it continues our dependence on fossil fuels. And even the most optimistic assumptions for shale gas have it meeting only 10% of European gas demand by 2030. The real energy security solution is cutting energy waste and switching to renewables.

According to the European Commission, tough targets in these areas could cut EU gas use by up to 29% by 2030. As energy security expert Professor Mike Bradshaw concluded in a report for Friends of the Earth in 2012, ‘Time to take our foot off the gas?’:

Regulation must be more robust, not ‘streamlined’

There’s one area where we agreed with the Lords: the regulation of shale gas in the UK is not fit for purpose. But our reasoning is different. Friends of the Earth has been tracking this closely for the last couple of years, both nationally and supporting local campaign groups. We have found a catalogue of omissions and oversights.

We agree with some of the Committee’s conclusions, such as stronger monitoring of abandoned wells, but fundamentally disagree with streamlining regulation. Instead, we need to make to make it more robust, more effective and properly monitored.

The Lords say the Government and industry has to do more to convince local communities to accept fracking – but local communities aren’t going to welcome the risk of corners being cut in the protection of their environment and their health.

But even with better regulation fracking isn’t the solution to our energy crisis. The real answer is cutting energy waste and exploiting the UK’s huge potential for renewables.

If only the Government put the same political capital behind those rather than fracking, then we would be on the right course.

By Tony Bosworth. Source: The Ecologist

Tony Bosworth is a Climate & Energy Campaigner at Friends of the Earth England Wales & Northern Ireland, where he co-leads the organisation’s work on unconventional gas. He has worked for Friends of the Earth for nearly 20 years, campaigning on a range of issues including transport, climate change, air pollution, housing and recycling.