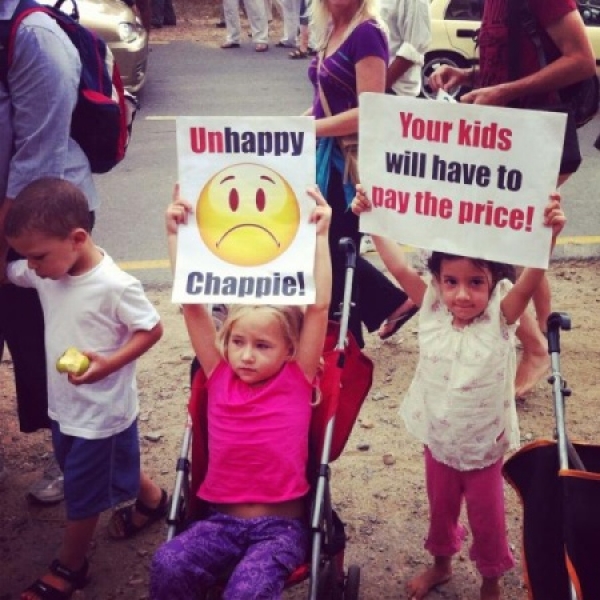 On Sunday a wonderful gathering of families with children and dogs met to challenge the proposal of a major office block set to be built on Chapman’s Peak, estimated to cost around R58 million.

Robin Carlisle, the MEC for the WC graciously acknowledged the somewhat 2 thousand people gathered on the mountain, saying he had expected only 5 hundred.

He said it was essential that Chapman’s Peak Drive is tolled because it is now  ‘a very dangerous’ pass due to the alien vegetation with fires that have dislodged rocks that have dismantled the mountain side, while admitting that it is the most expensive toll road (R31 a trip) in the country.

No to tolling and exclusive office block!

When asked why an expensive office block is to be built on National Park Land, public commons, Robin Carlisle did not respond and simply stated that the EIA had been prepared a good 5 years ago and that members of Hout Bay had participated in it. The crowd however disagreed and made it clear that they did not want tolling, and most certainly do not want an exclusive office block on the mountain side.

A major question that needs to be asked is why money is not spent on irradiating alien vegetation, so that fires would not reach such high temperatures. This would be far less costly than all the structures erected, and the maintenance needed to keep Chapman’s Peak safe. It would also do the planet and our mountain far more good to clear it of alien invasives.

The pass was not cleared of traffic for the duration of the march and no drivers were warned about the march. When the police were questioned on this, they responded that the toll company had refused to close the pass.

“As the crowd approached Chapman’s peak, the electronic signboard read that conditions were good and the pass was open. It could have read ‘march in progress, slow traffic’ instead. The fact that the toll company refused to close the pass for 2 hours is indicative of their priority, which is the collection of revenue!” said Bishop Davies.