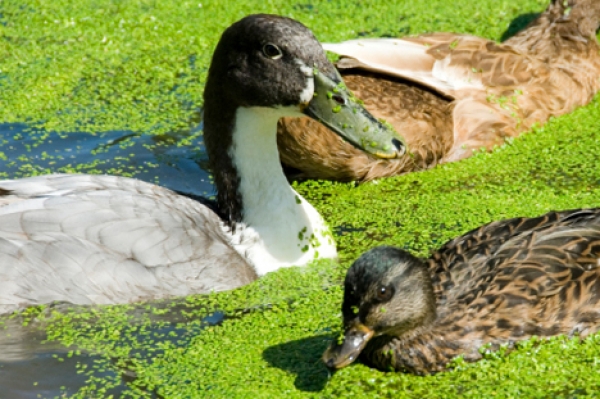 A little over a centimeter long, the common duckweed, Spirodela polyrrhiza, is often found colonizing ponds and lakes in a carpet of green. With a global distribution, the duckweed family claims the Guinness for some of the smallest, simplest, and fastest growing plants of the botanical world. Yet, despite their unassuming nature, these tiny fronds are making a huge splash in wastewater management.

For decades, major cities have been trying to tackle the growing waste problem with varying levels of success. Population growth and modern farming practices have led to unparalleled amounts of sewage. Add industrial byproducts and the resulting soup is chock full of disease causing pathogens, pesticides, and organic pollutants. Needless to say, it is an environmental health crisis.

Such cases are sadly the norm. The Great Lakes contain one-fifth of the world’s surface freshwater and yet billions of gallons of untreated sewage are dumped into its waters each year. In addition to disrupting the ecosystem, the contamination prevents patrons from enjoying its beaches.

But the common duckweed provides an almost magical solution. Duckweeds are natural super-filters, sucking up minerals and organic nutrients from the water, which then accumulate into the plants’ biomass. This process, called bioremediation, is not only safe, but effective. Central to the duckweeds’ success is their ability to grow at a rapid rate and hence, their ability to consume large quantities of contaminants such as ammonia, lead, and arsenates. In fact, duckweeds can double their weight in 1-2 days under ideal conditions.

Moreover, the roots harbor useful bacteria and algae that further speed up the process. Brazilian research published in Bioresource Technology has demonstrated the plant’s tremendous potential. As the world’s third largest producer of pork, Brazil has used duckweed ponds to treat its swine waste.

When grown on swine wastewater, the duckweed Landoltia punctata was shown to remove 98% of the total nitrogen and ammonia content, and 94% of the total phosphorus. Considering these are the main agents of eutrophication, or nutrient pollution, the results are groundbreaking. If that wasn’t enough, L. punctata also improved levels of dissolved oxygen, crucial for the health of aquatic ecosystems.

Once the plant has done its job, it is skimmed off the surface and used as a nutritious feed for livestock. A combo of ultraviolet light and ozone destroy any existing pathogens. But despite the benefits, duckweed implementation remains an upstream battle.

Paul Skillicorn, CEO of Biotechnology Research and Development, LLC, explains, “There’s always going to be a sense of disbelief when trying out a new crop. And farmers tend to be the most skeptical of people. It takes a good decade to change their opinion.”

A tremendous amount of biomass

Skillicorn is a crusader for duckweed, having set up ponds in India, Bolivia, Mexico, and Bangladesh. “It’s very cost effective: duckweed produces 30 times more protein than soybeans per hectare and can be grown vertically in trays. That’s a tremendous amount of biomass.”

That biomass has translated into steep profits made from selling the green gold as farm feed, and for processing into ethanol and even electricity.

But duckweed isn’t only for animals. Wolffia globosa, or Asian watermeal, is common fare in Thailand and Burma, where it is called khai-nam, or ‘water eggs’ due to its oval shape. Unlike soybeans, which lack the essential amino acids lysine and methionine, duckweed is nutritionally balanced. This renders it a viable food crop for impoverished countries.

Duckweeds also have the advantage of growing in temperate climates. As perennials, they survive winter by sinking to the bottom of ponds and lakes. Although less active, they persist as year round pollution fighters.

As climate change continues to threaten the future, global attention has turned to remaining freshwater supplies. In a world where water is projected to become the next oil, a versatile little plant is making a big green difference.

Ansel Oommen is a freelance writer, calligrapher, and book cover designer. His work has been published in a variety of venues including First Things, Blueprint, and Earthly Happenings. To contact him, please send an email to anseloommen@yahoo.com.