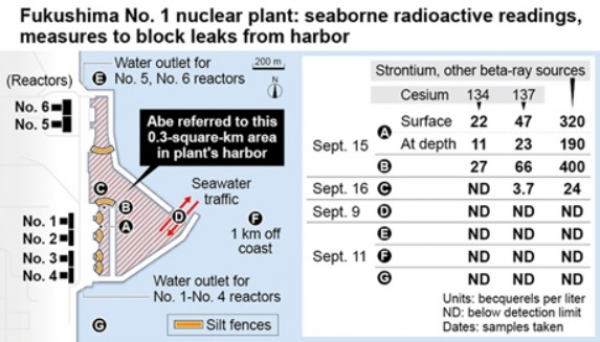 Water contaminated with radiation is flowing out into the Pacific Ocean from a harbor at the Fukushima No. 1 nuclear plant despite assurances from Prime Minister Shinzo Abe that it has been “completely blocked.”

Abe on Sept. 19 based his assertion on measurements taken in the outer ocean.

But experts said levels of seaborne radioactive substances stay mostly below detection limits in the outer ocean because the substances have simply become diluted.

The government has estimated that 300 tons of radioactive groundwater is leaking every day into the plant’s harbor. The harbor has an opening to the outer ocean through which 20 percent of the seawater within is believed to be replaced by seawater from the outer ocean during one cycle of high and low tides.

Radioactive materials decay with time at fixed rates, but available monitoring data have shown no decline in their levels.

A daily input of 60 billion becquerels is required to make that happen, Aoyama said.

Radioactive cesium and strontium continue to be detected within the harbor. They are believed to derive from the highly radioactive water that leaked through underground pits in April and May 2011 after the water was used to cool melted nuclear fuel during the early stages of the nuclear accident that began in March 2011.

To deal with the situation, Tokyo Electric Power Co. installed 0.5-millimeter-thick polyester barriers, which it calls “silt fences,” in the harbor in April 2011 to suppress seawater traffic. But the barriers cannot totally block the movement of radioactive substances because water and fine mud particles can penetrate the silt fences through grids of minuscule holes, each 0.02 to 0.03 millimeter in size.

TEPCO, the Fukushima prefectural government, the Environment Ministry, the Nuclear Regulation Authority and other organizations have been monitoring radioactivity levels in seawater and the seabed at 200 to 300 sites, most of them within a 20-kilometer radius of the crippled nuclear plant. But the methods of those measurements have been called into question.

Experts pointed out a lack of consistency in the sampling and analysis methods during a Sept. 13 meeting of an NRA panel tasked with ocean monitoring.

“Measurements could vary tenfold at the same site,” one expert said.

“The analysis methods are outdated,” said another.

NRA Commissioner Kayoko Nakamura said she will take measures to improve the situation.

“Data should be taken accurately and reliably,” Nakamura said.

The NRA plans to begin monitoring seabed soil in an area that stretches 20 km east of the nuclear plant and 50 km from north to south. The plan will make use of equipment developed by University of Tokyo researchers that is attached to a wire and lowered from a ship onto the seabed to measure radioactive cesium levels in soil as the ship moves along.

The NRA plans to monitor 600,000 sites at 1-meter intervals and put together the results before the current fiscal year ends in March.

By Shunsuke Kimura and Toshio Kawada. Source: The Asahi Shimbun