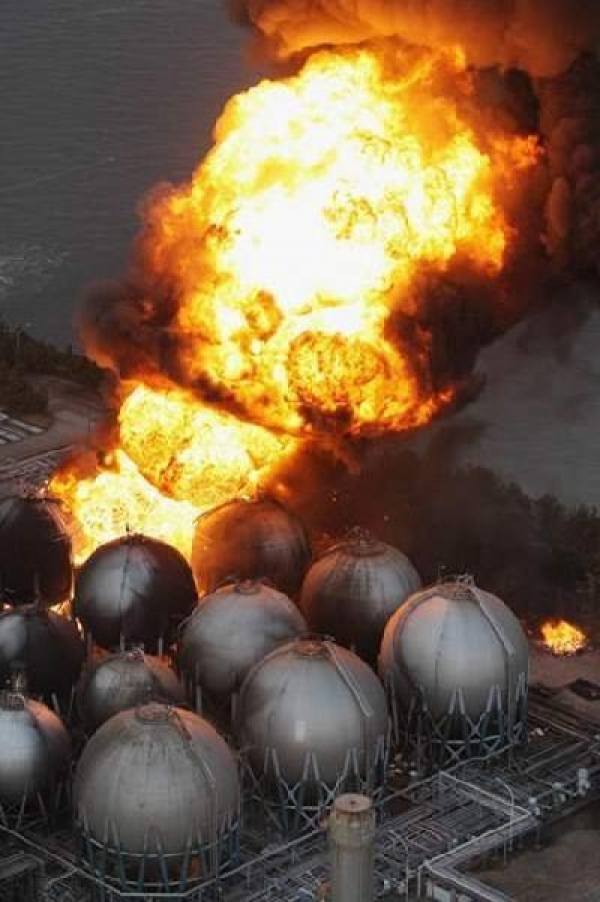 The world is still reeling from the shock of the terrible triple disasters of the 2011 Tōhoku earthquake 13 kilometers off the Oshika coastline near Sendai, the resultant tsunami and then the nuclear near-melt-down that hit Japan in the past week.

What exactly happened at the Fukishima nuclear reactor, we were wondering. The Green Times attended a talk at the University of Stellenbosch to learn more about this and the critical nuclear dangers facing Japan and the world at large.

Due to tremors, three of the six (numbers 1, 2 and 3) reactor units at the Fukushima nuclear reactor facility automatically shut down. Reactors 4, 5 and 6 had been shut down prior to the earthquake for planned maintenance. Electricity generation immediately stopped and there was no supply to the cooling plant or control systems.

‘A nuclear power station is not just like a button you switch off, it takes a while to cool down,’ said Dr Shaun Wyngaardt of Stellenbosch University.

Nuclear fuel requires 1-3 years of constant active cooling (by circulating water over it) before heat production is reduced sufficiently for passive cooling to take over to avoid fuel damage.

According to Dr Wyngaart diesel generators kicked in to ensure the cooling system remained in a working condition, but these were severely damaged after a big wave of water hit the reactor facility. The main concern at that point was the nuclear waste storage facility, because it contained high-level radiation. People were evacuated within a three kilometre radius because of possible airborne radiation in the area.

Mere minutes after the earthquake, ten metre high tsunami waves struck the region and travelled up to ten kilometres inland. This caused the emergency battery power for the High Pressure Core Flooder System to run out.

‘A reactor is like a big kettle. The boiling of the water actually keeps the system cool. Unfortunately without power, the water evaporates,’ says Wyngaardt.

Consequently the fuel rods, designed to kill the flow of neutrons, were exposed. The pressure built up to a big explosion. Wyngaardt believes this could have been a reaction of chemicals with hydrogen. There were three explosions this past week at Fukushima, which caused severe structural damage. The evacuation radius was increased to 20 kilometres.

The nuclear station is being cooled by means of boric acid and sea water.

‘The Fukushima incident is ironic, as today (18 March) is also the day that Rutherford discovered the nucleus,’ said Prof Richard Newman, head of the department of nuclear physics at iThemba Labs.

Japan’s nuclear accident has moved from being the third most severe in history to second place, alongside Pennsylvania’s 1979 Three Mile Island incident (USA). Chernobyl (1986) remains the worst, achieving a level 7 status on the International Nuclear Event Scale (INES). On Friday March 18, Japan had been declared a level 5 case; even though France believes it is already on level 6. This means more severe consequences from this nuclear accident than was initially expected.

Why is the radiation dangerous?

Radiation releases alpha, beta and gamma rays. Gamma rays are the most dangerous, because they are penetrating and can move quite far. Beta rays on the other hand, move extremely fast. The severity of radioactivity is measured by the half-life of the atoms, meaning the time it takes for half the number of electrons to decay.

The half-live of Fukushima is expected to be long, as it was with Chernobyl. Some say up to 1000 years. Longer half-lives means radioactivity is hovering in the air and it takes a long time for electrons to decay. Throughout Europe there are still ‘Chernobyl zones’ which people aren’t allowed to enter because they are still radioactive. The irradiation stage of Chernobyl is predicted to be more than a hundred years.

Effects of radiation on humans

If one is exposed to 5 Sieverts of radiation, you will die within 50 days. The annual limit of exposure to the general public is 2 micro Sieverts. In a 30 kilometre radius of Fukushima, 0.17 millisieverts per hour of radiation exposure has been measured. A cancer patient is exposed to up to 100 Sieverts when getting radiotherapy, but it is confined only to the cancer cells.

Radiation leads to the direct ionisation of DNA. If there are successful repairs by enzymes afterward, there will be no effect. If the repairs are unsuccessful, there are permanent effects such as genetic defects or fatal cancer. ‘Of every 100 people who are exposed to 1 micro Sievert of radiation, five will die of cancer. If you expose a million people, 50 will surely get fatal cancer,’ says Newman.

Newman says the amount of people with thyroid cancer will increase.

‘We produce stable iodine and our bodies ignore the radioactive iodine we are exposed to during a nuclear accident.’

Acute exposure to radiation is much more harmful than the same dose spread out over a long period of time. Exposure to uranium can increase chances of cancer, cause fatigue, hair and weight loss. It is also linked with cardiovascular diseases.

‘Scientists are urging governments to expect a nuclear accident once every twenty years at this rate. Are we going to be ready for the next one?’