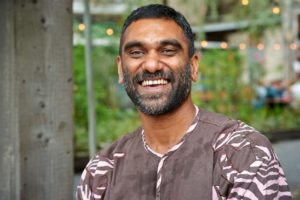 “The current response to our climate crisis in nothing but incremental tinkering. Rearranging the deckchairs. Those in power are doing system maintenance and re-arranging instead of redesigning them. Our current system is fundamentally broken, but our leaders are suffering from what’s called ‘cognitive dissonance’ – all the facts are there, but those in power block them out.”

“The planet will not survive unless it becomes a learning planet,” says the folk at Division for Lifelong Learning, who are proud of the 40 000 part-time students currently enrolled at the university.

“We are in an extremely fragile moment in history, with a convergence of 5 crises threatening our survival – the fuel crisis, followed by the food crisis, the poverty crisis (40 000 people die per day), the climate crisis (250 000 people die annually) and the financial crisis,” said Kumi.

Crises are treated as separate

“The problem is that these crises are not dealt with in an interconnected way, but are treated as standalone crises. Here an important word from the feminist movement needs to be imported, namely inter-sectionality. We need to shift towards seeing that all these crises are linked and must be dealt with simultaneously and systemically.

“We are running out of time to avert catastrophic climate change. We follow science. When they say it’s better to use seatbelts, we start using them. When science says you shouldn’t drive after drinking more than so much alcohol, we listen. Now science is clear. We need carbon emissions to peak in 2015 and then come down.

“Fundamental questions need to be asked about the role that learning and education is going to play in the context of this life-threatening crisis. Those that are paying the price have been least responsible for emitting climate change gasses. So now we’re talking about climate justice. Those emitters have to pay their climate debts to those currently paying the price for their over-consumption.

Africa is richest under the ground

“Africa is not a poor continent – we are the richest under the ground. That’s why we’re the poorest above the ground, as those using our resources are the exploitative corrupt elite.

“We have a fundamental failure of leadership on this continent and world-wide and need to make an educational intervention. The gap between rich and poor is increasing at a pace that is patently unsustainable. If we delivered the lifestyles of developed countries and the middle class in developing countries to everyone on earth, we would need 5 planets.

“Rural people have to subsidise those who over-consume in the cities. Is it right that our leaders are arguing about internal issues while our people don’t have food to eat? If you’re not against extreme inequality, you’re not against poverty.

Extreme wealth should be history

“We should make extreme wealth history. Those that live excessively cannot have empathy with the poor. Julius Nyerere in his wisdom taught austerity and humility. In today’s culture whoever gets into leadership becomes a god, a boss. Not to mention excessive perks due to an excessive number of partners. We need to re-introduce servant leadership.

“The notion of lifelong learning rests on lots of unlearning. We need to unlearn a host of untruths which we’ve been fed. Like the story about teaching a man to fish rather than giving him fish. How is he going to fish if he doesn’t have a fishing rod? If he’s a man, will he even share his fish with his family?”

Last week Kumi was in Rome involved in the discussions of Italy phasing out nuclear energy. What he wanted to say to the Pope and all religious leaders, was: Do you really think that God would hide the energy which he knew we’d need deep under the earth or oceans, so that we can kill ourselves and other precious creatures trying to get at it? That whilst he liberally supplies wind and solar above the ground?

Academics need to challenge the untruths

“And it would need to be a male God, he said, else we wouldn’t have had this problem in the first place,” he said to an applauding audience.

“How do we turn this danger into an opportunity? We can do what the Chinese did, who have one word for both danger and opportunity. They now supply 90% of the EU’s solar energy. We need to look through fresh lenses, ask new questions and challenge everything.

“Climate change and poverty alleviation are two sides of the same coin. It is an indictment on the South African academic society that they are not challenging untruths being spread,” said Dr. Kumi, a former academic himself.

NO solution to nuclear waste

“And then this country is planning to build more coal fired power stations and even nuclear stations, supposedly to supply the rural poor. But I guarantee you that if we don’t manage to stop that, none of that energy will go to the poor. Always remember that there is NO solution to the problem of nuclear waste – this will once again be dumped near our most vulnerable people. It takes 300 to 800 years before it becomes safe.

“Africa has the biggest potential for renewable energy generation, which can create ten times as many jobs as nuclear. Whereas in the past there was red-green tension – tension between labour and environment – they are now collaborators in a just transition to a progressive new economy.

“What we need now is intergenerational solidarity. Our current leaders are ignoring the needs of future generations. And this struggle is a marathon, not a sprint. It requires a lifetime of activism. There will be days when many of you will question whether your contribution actually makes a difference. Do not let the absence of immediate success put you off.

Dr. Naido closed his inspiring speech to an appreciative audience by reminding us:

There we were, folk from different cultures, all deeply concerned about the future of this planet. Once again, it is confirmed that we are indeed fighting the good fight and the difficulties we experience are not a sign that we’re barking up the wrong tree, but that we are building character to ensure a future for our children.

I was honoured to briefly meet Kumi afterwards – a man of integrity and courage whom I have admired for a long time.

Please sign the Greenpeace petition to switch the internet to green energy in our story Let’s clean up the Net.