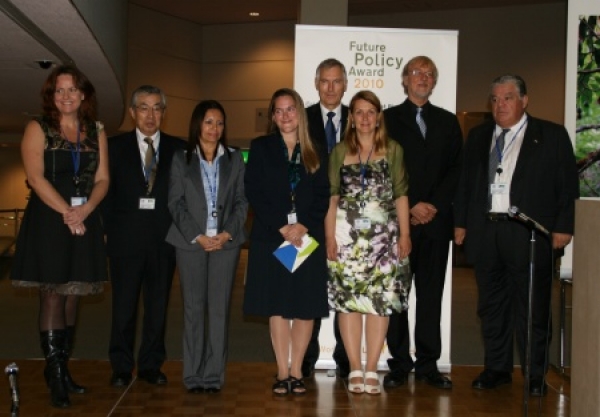 The effects of the law are outstanding: With 26% of its total territory designated as protected areas, Costa Rica is the first developing that succeeded in halting and reversing deforestation. Moreover, the country ranked first in the Happy Planet Index 2009, and is a recognised pioneer in ecotourism.

The Future Policy Award, established by the World Future Council, annually celebrates laws with particularly positive effects on the living conditions of current and future generations. The first award to honour exemplary policies rather than exceptional people on an international level, it highlights solutions, raises public awareness and speeds up policy action towards just, sustainable and peaceful societies. This year’s award gala was hosted by the Secretariat of the Convention on Biological Diversity (CBD), as an official part of the tenth Conference of the Parties (COP10). 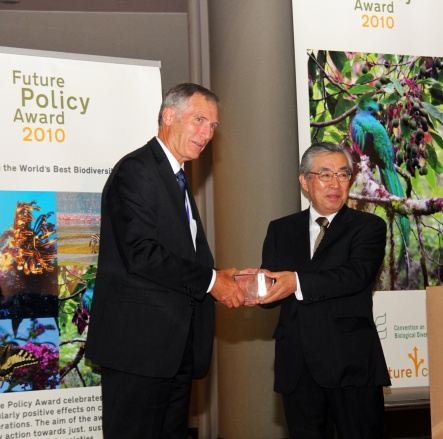 Succeeding Dr. Djoghlaf, Jakob von Uexkull, Founder of the World Future Council and the Right Livelihood Awards, spoke up to the numerous delegates recalling ‘that the right rules and legal frameworks help millions of people to do the right thing.’

Prof. Marie-Claire Cordonier Segger, Director, CISDL, and Chair of the WFC Future Justice Commission, presented the ceremony’s highlight when she spoke of the Costa Rican policy as ‘a brilliantly comprehensive policy for the respect for all forms of life and for cultural diversity, biodiversity protection and inter – and intragenerational equity,’ before handing over the Future Policy Award 2010 to His Excellency Mr. Mario Fernandez Silva, Ambassador of the Republic of Costa Rica to Japan. H.E. Mr. Silva expressed deep gratitude and said, ‘I am most honoured to accept this prize from the World Future Council. This law integrates biodiversity protection and the sustainable use of biodiversity and it enables us to pass the beautiful natural wealth of Costa Rica on to our future generations.’ 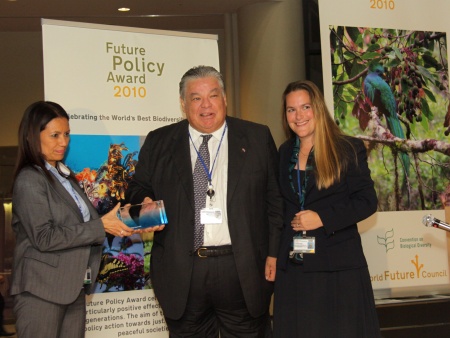 He stated that ‘the Australian Great Barrier Reef Marine Park Act jointly with the Environment Protection and Biodiversity Conservation Act aims to provide the highest level of protection to the marine ecosystems and should be a worldwide standard.’

Prof. Suzuki presented the award to Peter Cochrane, Director of National Parks and Head of the CBD Delegation of Australia, who proudly accepted. The Australian law has elevated the region of the Great Barrier Reef to a matter of national environmental significance, while still allowing for sustainable use by such industries as commercial fisheries, recreational fishing and tourism, pioneering the idea of a ‘multiple-use’ park.