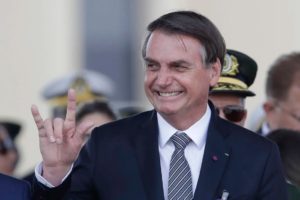 Leaders of the world’s major democracies are due to hold emergency talks this weekend on the wildfires engulfing the Amazon, as international efforts to force Brazil to change its deforestation policies gathered momentum.

As heads of state and government were due to arrive at the G7 in Biarritz on Saturday, France and Ireland threatened to block the Mercosur free-trade agreement between the EU and South American nations if the government of Jair Bolsonaro does not stop the deforestation of the Amazon, which experts say has fuelled the fires. Other EU members were under pressure to walk away from the Mercosur (Southern Common Market) deal, which is already unpopular among European farmers.

The Irish taoiseach, Leo Varadkar, who was first to call the Mercosur deal into question on Friday, said Bolsonaro’s attempt to blame the fires on environmental groups was “Orwellian”.

On Friday evening, Bolsonaro used a TV speech to profess “profound love and respect” for the Amazon but played down both the significance of the fires as well as his administration’s responsibility for them.

The Finnish government, which currently chairs the EU, called on member states to consider more trade restrictions. The country’s finance minister, Mika Lintila, said he “condemns the destruction of the Amazon and calls for Finland and the EU to urgently look into the possibility of banning Brazilian beef imports”.