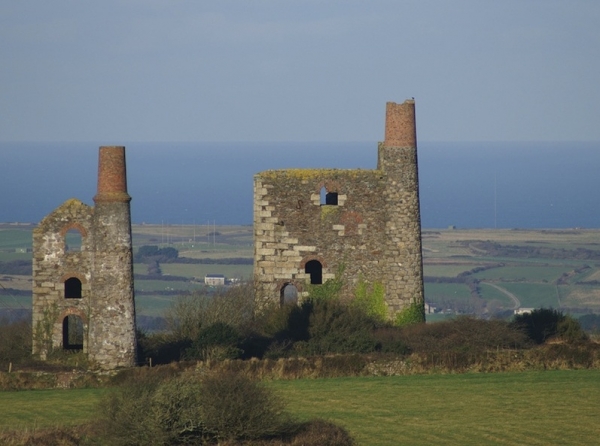 When British geologist Ryan Law lined up to meet the Queen in Exeter, England earlier this year, he did something not everyone would do: He showed her a drill bit.

It was no ordinary household piece of spiralled metal.

Rather, it was a chunk of industrial equipment that will help Law bore three miles down to hot granite. The 190 degree C rock will provide a natural furnace to Law’s planned utility scale, grid-connected geothermal electricity and public heat station outside the town of Redruth in Cornwall, England’s southwest county.

“It’s good when you have something tangible to show her, rather than just trying to describe it,” says Law, managing director of London-based Geothermal Engineering Ltd.

Law believes the installation will showcase a renewable energy concept that can play a huge role – bigger than solar and wind – in moving the world off of fossil fuels. It would also pave the way for Law to build another 25 geothermal plants in Britain.

Perhaps an even better name for it would be geothermal power for the rest of us, because it allows you to build utility-scale geothermal electricity and heat stations almost anywhere. Unlike conventional geothermal places – think Iceland – EGS does not require dramatic, bubbling geology full of volcanoes, fault lines, lava and near-surface heat.

Instead, it makes use of underground rock’s natural tendency to be hot enough – typically somewhere between 120 degrees C and 200 degrees C – to drive a turbine.

EGS heats up water in a huge closed loop by sending it down and releasing it over and through the sizzling rock. It pumps the hot water up and exchanges its heat into separate pipes to create steam that drives turbines and feeds public heating conduits. The cooled water runs back down, to repeat the process.

In the U.S., a 2007 study by MIT for the U.S. Department of Energy, entitled “The Future of Geothermal Energy”, concluded that the country has enough EGS potential to theoretically meet 2,000 times its primary energy needs, and that realistically, EGS could contribute 10 percent of its electricity by 2050.

Law’s Redruth plant will have an electricity capacity of 10 megawatts, small compared to 500 MW and 1 GW coal, gas and nuclear plants. But EGS does not require much surface (Redruth will shoehorn onto the equivalent of half a football field). By dotting plants around small parcels, EGS could power municipalities and communities, reducing reliance on large plants and the attendant problems of fossil fuels and of transmitting electricity over long distances.

Law’s planned 25 plants would have a total capacity of about 300 megawatts, and could furnish heat to schools, businesses and recreation centers.

One obstacle is money. The entire Redruth project will cost about £53 million (R680 million) including 3 wells, and Law needs £15 million (R192 million) for the first well.

He’s getting there. The government has granted £6 million (R77 million). An oil company (Law won’t identify it) has committed part of the balance. Law is awaiting a similar pledge from another industrial company for the rest of the £15 million. Oil, gas and mining firms make logical geothermal partners because of their drilling knowledge.

As with any drilling, Law won’t know exactly what’s underground until he gets there. He has expert information from the UK government’s 1976-1990 hot dry rocks research in nearby Rosemanowes, but the well’s productivity ultimately hinges on many variables like temperature, permeability, pressure, and temperature gradient.

For example, a recent “heat rush” in South Australia’s Cooper Basin region that was intended to start providing up to 500 megawatts of EGS electricity has stalled, as the wells have so far underperformed.

It’s all part of the risky, upfront cost of EGS.

“You have to have patience, you have to run a reservoir for a while,” notes Jefferson Tester, lead author of the MIT report and now the director of the Cornell Energy Institute at Cornell University.

shaking up the landscape

Another potential hazard: earthquakes. The industry calls them “seismic events.” They’re common with any drilling. While they’re generally no worse than a rumbling truck, they’re a public relations challenge and have shut down a couple of geothermal projects in Europe.

EGS will also have to compete against other renewables, and against natural gas.

The technology has struggled with these challenges before. Trials date back to at least the 1970s. Besides Britain’s Rosemanowes, the U.S. carried out research in Fenton Hill, N.M. in the 1980s.

However, with renewable energy now an international imperative, EGS could rise. Germany, France and Switzerland all have small, live projects. Once Law gets past drilling in Redruth, operation costs should plunge – drilling represents more than half the cost of operations – making EGS not only renewable, but low price to end users.

Then Law won’t have to show the Queen a drill bit again. He could just impress her with the finished product.