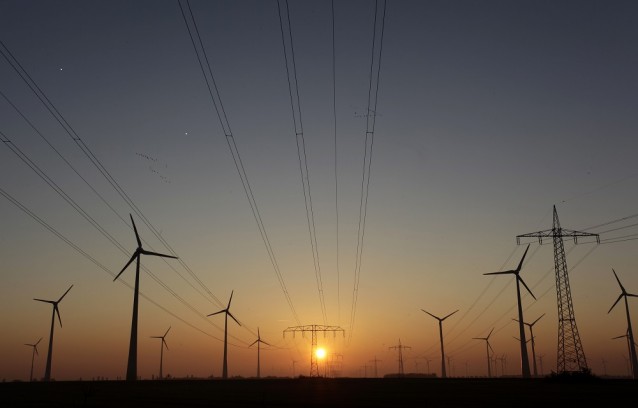 On Sunday 11 May, Germany’s impressive streak of renewable energy milestones continued, with renewable energy generation surging to a record portion — nearly 75 percent — of the country’s overall electricity demand by midday.  With wind and solar in particular filling such a huge portion of the country’s power demand, electricity prices actually dipped into the negative for much of the afternoon, according to Renewables International.

In the first quarter of 2014, renewable energy sources met a record 27 percent of the country’s electricity demand, thanks to additional installations and favorable weather. “Renewable generators produced 40.2 billion kilowatt-hours of electricity, up from 35.7 billion kilowatt-hours in the same period last year,” Bloomberg reported. Much of the country’s renewable energy growth has occurred in the past decade and, as a point of comparison, Germany’s 27 percent is double the approximately 13 percent of U.S. electricity supply powered by renewables as of November 2013.

Observers say the records will keep coming as Germany continues its Energiewende, or energy transformation, which aims to power the country almost entirely on renewable sources by 2050.

To reach the goal of 80 percent renewables by 2050, Germany had to move quickly

“Once again, it was demonstrated that a modern electricity system such as the German one can already accept large penetration rates of variable but predictable renewable energy sources such as wind and solar PV power,” said Bernard Chabot, a renewable energy consultant based in France, via email. “In fact there are no technical and economic obstacles to go first to 20 percent of annual electricity demand penetration rate from a combination of those two technologies, then 50 percent and beyond by combining them with other renewables and energy efficiency measures and some progressive storage solutions at a modest level.” 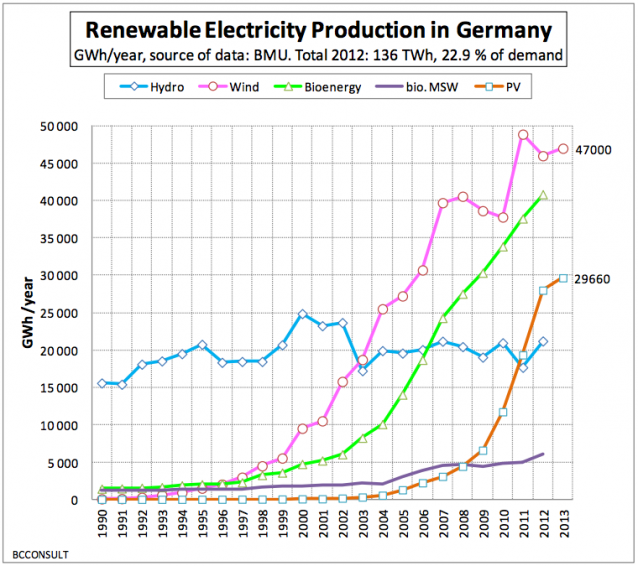 To reach the lofty goal of 80 percent renewables by 2050, Germany had to move quickly. Despite being known for gray skies, the country has installed an astonishing amount of solar photovoltaic (PV) power — setting multiple solar power generation records along the way.

At the end of 2012, Germany had installed considerably more solar power capacity per capita than any other country. The rapid growth has slowed, however, with 3.3 GW of PV installed in 2013, compared to 7.6 in 2012. And as countries like the U.S., Japan and China catch up, installations have continued to drop in 2014.

Regardless, a recent analysis by the consulting firm Eclareon found that solar power has reached grid parity in Germany, meaning once all of the costs are accounted for, the price of commercial solar power is now equal to retail electricity rates.

And wind power reached record output levels last year — producing a massive 25.2 GW and accounting for 39 percent of the electricity supply on a single day in December.

The unprecedented growth of solar PV in particular has been fueled in large part by policies that incentivize clean energy. Germany’s simple feed-in tariff (FIT) policy, which pays renewable energy producers a set amount for the electricity they produce under long-term contracts, has driven the solar power boom. But as installations continued to outpace government targets, Germany announced last year that it would begin scaling back its feed-in tariff.

The FIT is financed by a surcharge paid by utility customers, but a major part of the problem stems from the fact that industry is largely exempt from the renewables surcharge — meaning the burden falls on households. Rather than adjust the industry exemption, the government instead proposed a “PV self-consumption charge” on new photovoltaic systems, something Germany’s Solar Industry Association recently announced it plans to challenge in court.

The equity of the renewables surcharge isn’t the only criticism of Germany’s power transformation. Along with cutting out fossil fuel-generated energy to a large extent, the transition to renewables includes completely phasing out nuclear power. These goals are only achievable in combination with greatly reduced energy demand. Instead, coal imports are increasing in order to meet the country’s baseload power demands. And retail electricity rates are high and rising, putting pressure on lower income individuals in particular.

What is the impact on the consumer?

But many of the criticisms are largely overblown, according to Amory Lovins of the Rocky Mountain Institute. The modest uptick in coal-fired generation was substituting for pricier natural gas, not representative of a return to coal as it’s often mischaracterized. In fact, last December, as renewable energy production continued to grow and energy demand shrank, Germany’s largest utility chose not to renew two long-term contracts for coal-fired power.

And while much is made of rising industrial electricity prices, Lovins points out that in fact, “giant German firms enjoy Germany’s low and falling wholesale electricity prices, getting the benefit of renewables’ near-zero operating cost but exempted from paying for them.”

And as for the impact on the consumer, “the FIT surcharge raised households’ retail price of electricity seven percent but renewables lowered big industries’ wholesale price 18 percent. As long-term contracts expire, the past few years’ sharply lower wholesale prices could finally reach retail customers and start sending households’ total electricity prices back down.”

Citizens, cooperatives and communities own more than half of German renewable capacity

What’s more, “in Germany you have the option of earning back your payments, and far more, by investing as little as $600 in renewable energy yourself,” Lovins writes. “Citizens, cooperatives, and communities own more than half of German renewable capacity, vs. two percent in the U.S.”

Challenges aside, Energiewende — rooted in the acknowledgement that a fossil fuel-based energy system is not sustainable — is remarkable for its scope and its widespread support, particularly in a heavily industrialized country like Germany. “Don’t forget what Germany is doing right now. It’s changing its power supply,” Paul Hockenos, a Berlin-based energy expert and journalist, told Voice of America earlier this year. “The last time when an energy supply was changed was the industrial revolution; this is something that has never been done before.”