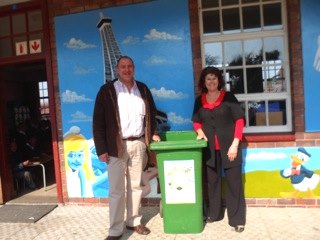 Above: Deon Roux and Bernadette van Graan of Germiston Laerskool.

Schools in Germiston and surrounding areas are proving to be dynamic eco-warriors with their fevert commitment to recycling.  During the past few months, no less than nine schools have partnered with the Polystyrene Packaging Council (PSPCP) to recycle food packaging items made from polystyrene.

Laerskool Germiston Primary, Elsburg Primary and Ons Ark Nursery were the first schools to receive specially marked bins from the PSPC for the collection of breadtags (used for the Breadtags for Wheelchairs project), and yoghurt tubs and plastic cutlery that get recycled for the Tutu Desk project.

Since then, 6 more schools in the area has joined them in their collection efforts, namely: Sonshine Kids, Tic Toc, Ladybird, Teddie Bear, Ducktails, Happy Kids.

“The kids and parents are passionate about making a difference in the lives of people who are less fortunate through the simple act of recycling.  It is wonderful to know that we are preventing waste from going to landfill, while at the same time helping somebody “purchase” a wheelchair or get a lapdesk that will be used for school work in areas where there is a dire need for schools desks on which to work”,  she says. 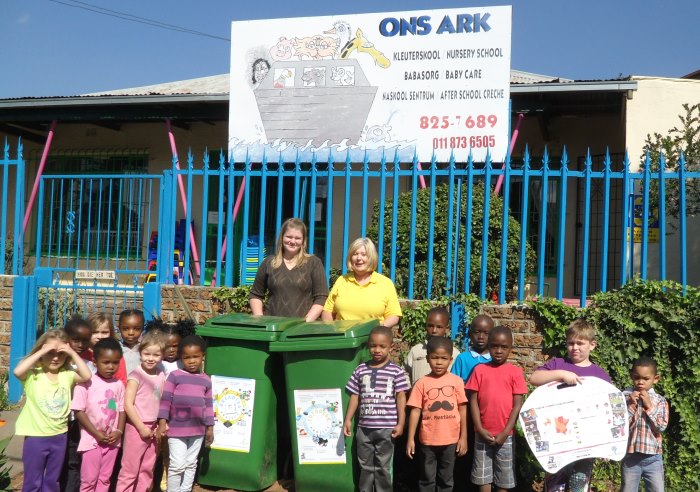 Teresa Botes and Erin Botes with pupils of Ons Ark Nursery school, photographed with their recycling bins and a lapdesk.

According to Adri Spangenberg, a Director of the PSPC, Germiston is fast becoming one of the shining examples of areas of successful recycling communities, thanks to the involvement of local schools and recycling companies such as Remade Recycling who are willing to partner with local schools, organisations and individual collectors.

“Polystyrene is a highly recyclable material that is used for a variety of different applications – ranging from picture frames to seedling trays. However, due to the fact that the material is made of 80 % air, it is very light in weight. Recycling collectors are therefore understandably hesistant to collect the material from households as they will in effect be transporting air! We therefore have to partner with schools and communities who are willing to collect large amounts of the material for us, in order to make it worthwhile for collectors to pick it up and take it away for recycling.

Residents of Germiston and surrounding areas who are are keen to recycle their polystyrene and other plastics, can contact Mike Bills of Remade Recycling on (011) 873 6545, or drop off their clean, dry recyclables at No 18 James Bright Avenue, Driehoek.

The Tutu desk is a simple, portable and robust school desk made from recycled high impact polystyrene that a child can place on their lap, whether they are sitting on the floor or on a chair. It creates a dedicated ‘work zone’ and stable writing platform. Each desk is designed to last the lifetime of the child at school, and falls under the patronage of Archbishop Desmond Dudu. The PSPC is proud to be part of this project via WESSA (Wildlife and Environment Society of South Africa) and its network of Eco-Schools who are also collecting yoghurt tubs that are recycled into the lapdesks.

The hugely successful and popular “Breadtags for Wheelchairs” project is currently in its 6th year and has already touched hundreds of lives around the country. By collecting breadtags made from high impact polystyrene, schools and organisations can “purchase” wheelchairs for people who need them, but are unable to afford it due to financial difficulties.

Visit www.mywaste.co.za to find a map of recycling drop off sites around the country.