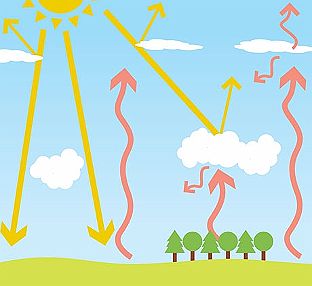 From catastrophic chain-reactions which could push us into dangerous climate change, to cooling effects which balance out global warming, climate feedbacks are an important area of research for scientists.

This happens when a change in our climate causes an impact which changes our climate further – a knock-on effect which feeds back into our climate.

There are two kinds of feedbacks:

Feedbacks have the potential to radically affect climate change. While there are both negative and positive feedbacks, the big question is how these will balance out.

There are some potentially very serious positive feedbacks which could significantly add to global warming – pushing the Earth towards dangerous climate change. However, not enough is known about the feedbacks to be sure of this – that’s why climate scientists are working very hard to understand how they work and what their implications might be.

The more we understand about them, the more confidence we have in our climate projections for the future. The better our projections, the better we can understand the extent of climate change and prepare for it.

Which climate feedbacks do you fully understand?

There are some types of feedback which are fairly well understood by climate scientists and their effects are routinely included in climate models (which allow us to make projections for our future climate). This means we have taken into account the impact they may have as our climate warms in the future.

As air gets warmer, its capacity to hold moisture increases. Our atmosphere is getting warmer because of climate change and, as a result, is holding more water vapour. This is a potent greenhouse gas – when in the atmosphere, water vapour helps the Earth hold on to more energy from the sun. So a warming climate means more water vapour, which in turn warms the climate further – a classic positive feedback.

Albedo is the amount of light reflected by a surface, which is very important in climate science. A surface with a high albedo, such as snow or sand, will reflect more sunlight back out to space. The lower the albedo, the more energy and heat is absorbed.

Global warming is causing ice and snow to melt, revealing the land or ocean underneath. Ice and snow reflect a lot of sunlight – certainly more than land and the oceans. So as the ice melts, more of the sun’s energy is absorbed and so the planet gets warmer still – which in turn melts even more snow and ice.

Which feedbacks do you understand less?

There are feedbacks which we understand and are starting to be included in models, but there is still some uncertainty about them. This doubt relates to the exact way the feedbacks work, the magnitude of the feedbacks and how they might respond to our changing climate. We are doing a lot of research to understand more about these processes and the models are being updated accordingly.

For every tonne of carbon dioxide (CO2) released into the atmosphere, within a year about half of that will be absorbed by the ocean and land, e.g. through trees and plants.

This important process helps mask the true extent of our CO2 emissions but it could be affected by global warming. Any changes could have a huge impact on the future of our climate if we continue to emit large quantities of CO2.

Global warming could affect the process in two ways:

A simplified carbon cycle, showing CO2 absorption rates of the land and oceans.

Overall, these changes could dramatically reduce the overall negative feedback of the carbon cycle, potentially withdrawing the current benefit it offers us. These processes have been inputted into climate models over the past decade. As we understand more about how they work, their importance is coming to the forefront of how we look at climate change.

Land carbon cycle feedbacks were included in projections for the UK climate in  UKCP09 and models including the processes will be used extensively in the next international climate assessment by the IPCC.

The way climate change affects clouds could bring about a positive or negative feedback. The big scientific question, which we have been researching for more than a decade, is how do clouds respond to a change in CO2?

There is now some consensus for reduced stratocumulus clouds in a warming climate – leading to a net positive feedback.

We are also looking at the effect on high clouds, such as cirrus. These have a small overall warming effect on climate.

They reflect sunlight in the same way as stratocumulus, but they have a more powerful effect as a blanket – helping retain heat radiating away from the Earth’s surface. As such, increases in cirrus will warm the climate, while decreases will cool it – the opposite of stratocumulus.

There is a lot of research going into this area and advances in understanding will enable us to improve our confidence in climate projections.

Feedbacks not included in the models

There are some feedbacks we have recognised but remain big uncertainties. We don’t know enough about them to include their effects in climate models. However, they are potentially very serious so there is still a lot of work going on to try to understand them and get them into our projections.
Methane hydrates (positive feedback)

These are potentially a very big deal which could change our whole understanding of climate change, but it’s very uncertain.

There are very large stores of methane locked away at depth in the ocean. We know the stability of these stores is dependant on temperature. As the oceans get warmer it’s possible this balance could be upset and the stores released – which would be very serious. Methane is more than 20 times as potent as CO2 as a greenhouse gas.

There’s some evidence to suggest that going back over a very long historical period (more than millions of years), the release of these methane stores may have played a big role in abrupt and severe changes to past climate. How close we are to any possible threshold is very much an open question.

This is a big question mark but also potentially a very big deal. There are very organic rich soils in certain parts of the world. At higher latitudes, these are frozen over by permafrost, and those greenhouse gases are effectively locked away. When the soil thaws due to rising temperatures, these gases could become unlocked and be released as CO2 or methane. At the moment we don’t know how much of the CO2 is stored away or to what extent it would be released when the soil thaws.

These are two key questions, and we need to figure out how to resolve them on a global scale in a climate model before this effect can be included in our projections. Within the next five years we hope to know enough about this process to start including its effects.

We assume there are also hidden feedbacks in the system, but as long as we keep climate change relatively small we can be confident these unknown issues won’t come in to play.

However, as we move further away from the present climate, we are exposing ourselves to more risk about these unknowns. Even only taking into account the climate feedbacks we are aware of now, they pose a great incentive for us to quickly reduce our greenhouse gas emissions to keep global temperature rises to a minimum.