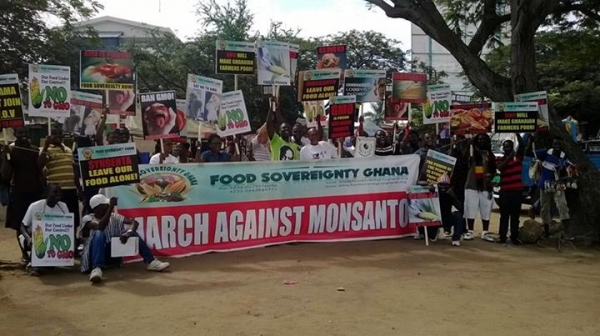 Ghana was represented in the second planned march against agricultural giant Monsanto which took place around the world last weekend. The protesters rallied against the company’s use of genetically modified organisms and tried to raise awareness about its corporate practices.

Food Sovereignty Ghana, is happy to announce that we have successfully had a public march against the introduction of genetic modified seeds and other organisms into our local food chain. This is just the beginning. Our march further seeks to halt the government from signing up to UPOV, an irreversible legal action which will have grave consequences for our sovereignty as a nation, for economic justice, and the safety and diversity of the food we eat in Ghana.

The march began last Saturday at 10:00am at the Kwame Nkrumah Circle, through the – Obetsebi Lamptey Circle – Central Mosque – and ended at the Agbogbloshie Market, where FSG members interacted with the market women, most of whom had no idea about GMOs! It still appears a good section of the Ghanaian public are being excluded from vital decisions affecting a permanent change in their diets! A report by the Ghana News Agency shows clearly the extent to which the public has been consulted over such a serious matter:

“Some of the market women interviewed by Ghana News Agency said they were not aware of GM food and urged government to take action against its importation.”

They are unaware of the attempts to replace their food with its “substantial equivalents”!

I am a true believer in the might and power of the people when we are united in synergy with one spirit and goal. The march started off with a strong will and very high spirit to tell the world that David can still beat Goliath!

It also showed that even though the Ghanian masses are left in the dark where the issue of GMO is concerned, they are highly receptive to truth and alternatives solutions to assist themselves to be liberated from these capitalistic parasites such as MONSANTO.

Our mission was well received by the consumers, traders, market women and even the police on the march with us. The general concerns have to do with the fact that people are being used as experiments without their knowledge and consent. Secondly, they found it very appalling that people could be so evil and callus.

The engagement in the market was very surprising and drew a lot of curiosity Great concerns was also expressed in relation to what can be expected from us in the future, this resulted in us being invited to meet with the market queens in the near future to make sure they are well informed about these issues.